Thunder Women’s Volleyball Close Out the Season Up North

The Thunder Women's Volleyball team closed out their season this past weekend as they travelled to Fort McMurray to face the Keyano Huskies. In Friday's match, the team came out and challenged the Huskies with an aggressive serve and attack plan and were playing point for point with the opposition. As the set wore on the ladies broke down in their ball control and the Huskies took advantage of it and won the set. The Huskies then controlled the remainder of the match and won in three sets with scores of 25-21, 25-13 and 25-18. Shandelle Meyer was the Thunder of the Match.
With the season wrapping up on Saturday, the team wanted to finish off on a positive note but they were unable to accomplish the goal and lost in straight sets, 25-21, 25-22 and 25-20. Amy Davies was chosen as the Player of the Match for the Thunder. Head Coach Trever Turner's had this to say about the weekend and the season: "Overall we struggled with the mental part of the game and it cost us in key times of each set. We had some solid performances from a couple of players but to be successful we needed everyone to contribute and that didn't happen.  With our season wrapped up, we as coaches will begin the process of building this program for next year. Our goal is to compete for a playoff position and ultimately the ACAC Championship. We believe the talent is on this team but we need to evaluate in the next couple of weeks before any decisions are made. Recruiting is very important as we improve on our compete level for 2015-2016." 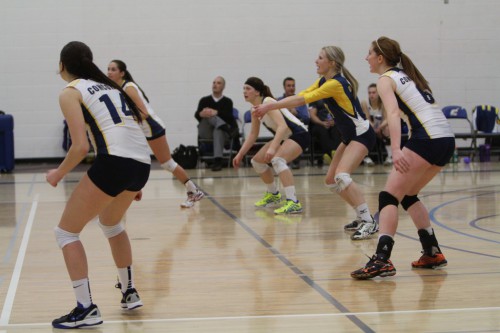