When John Armbruster (CHS, ‘44) speaks about his father, you can still hear the awe in his voice after all these years. 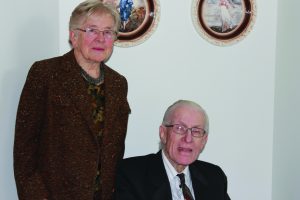 Having emmigrated from Austria as a young man in the 1890s, John Armbruster Sr. eventually settled in the Stony Plain area, building a lumber yard and hardware store from the ground up. He instilled in his five children a strong work ethic and a do-it-yourself attitude. Not only did he supply the materials to build the surrounding community,John’s father brought the age of electricity to Stony Plain with the first electrical generator. He supplied the young town with power from 1925–29, and his face now watches over the historic downtown from a 1400 sq. ft. mural by artist Brian Romagnoli titled Evolution of Electricity.

The Armbrusters were among the earliest donors to Concordia, supplying materials and money to help build the chapel. After graduating from Concordia High School in 1944, John went to work alongside his father, where he and his brother Jack expanded the family business to pouring concrete foundations as the town grew up around them. Taking over the store when his father retired, John also inherited his father’s strong connection to Concordia, serving on the Board of Regents.

Along with lessons on building a business, John’s father also instilled in him the value of building a good life, a strong marriage and a healthy community. Concordia helped reinforce the strong moral foundation that guided John and his wife Beth as they worked side by side each day, building a wonderful life together. John Armbruster’s Charitable Trust Helps Concordia Grow Forward

From traveling to Europe and the Middle East to running the store and balancing the books, the power of that lifelong bond is still obvious today. Their respect and affection creates an intimate bubble around the couple (now in their 90s) as Beth helps finish John’s thoughts when his concentration wanes. Seeing them together, relaxed in the beautiful custom-built home that looks west onto a perfect prairie pasture, it’s easy to see the love, commitment and faith that’s made for such a happy marriage.

They say you can tell everything you need to know about a man by watching him laugh. It’s true John struggles to find his words these days. His body bends and leans with age, a testament to a life of hard work. But here in the moment, looking at a 70-year old yearbook and recalling stories from his days at Concordia, his eyes light up easily with the generosity laughter, drawing a straight line to another time and place.

He recalls the evening rounds of Professor Schwermann – the first President of Concordia – but to John, a trusted teacher and a good friend. “He would come around the dorms at 10:00 to make sure the lights were out,” John says, “we would wait until he left then tip over the beds of whoever was sleeping.” And with the war raging in Europe, John recalls spending a long time marching around the campus in a “military platoon.” His father wasn’t keen on his children being soldiers, and encouraged them to pursue their education. John’s sister Gertrude took up that challenge, going on to become a research professor in food sciences at Cornell University.

From their first gift to the Concordia choir almost 30 years ago, the Armbrusters have blessed future Concordians with donations that have helped grow the institution that’s been so important to their family. John and Beth approached their estate planning wanting to reduce taxes and to maximize the value of their gift, while ensuring their needs are taken care of through their golden years. By converting property and investments into a Charitable Remainder Trust they were able to generate a tax receipt for their full gifts to Concordia and the Church while continuing to stay comfortable and secure in their home.

When he looks back over his life, there is a deep sense of satisfaction. John grows thoughtful as he says “We were in the business of building. It’s a good way to live.”