The Concordia Thunder Women's Volleyball team continued their winning ways in the final week of ACAC regular season competition with a victory and a 'so-close' loss. The Thunder began a two game home stand on Friday night at the RKAC, blasting off to a great lead in the first game.  The Thunder never looked back and captured their third straight win, 26-24, 25-16 and 25-23. Captain Bailey Magas led her team with 17 kills, 20 digs and 5 service aces.  MacKenzie Bouchard also came up big on the defensive side with 12 digs.  Player of the Game went to Bailey Magas.
Saturday afternoon's season finale saw a slightly different result for the Thunder as they struggled back and forth with Keyano throughout the match before bowing to the Huskies in the fifth set (25-16, 19-25, 25-10, 17-25 and 9-15).  Bailey Magas pushed her team with 21 kills, 14 digs and 4 Service Aces.  Sarah Schwanz also played a strong match, contributing a strong game with 7 kills, 18 digs and 1 service ace.  Dayna Starke was named Player of the Game for her energetic play and strong blocking.
Departing Thunder Head Coach Sherri Milne commented on the match, the season and her tenure as both an Assistant and Head Coach of the Thunder: "It was with great efforts that everyone saw court time (and) helped contribute to the scoring throughout the weekend.  I would like to thank the players and their families for the support over the past 5 years. Concordia has been my second home over the past 5 years.  It is with great sadness that I have stepped down as Head Coach to spend more quality time with my family.  It has been a pleasure to be the Coach here and I wish everyone all the best in the future."
Thanks Sherri from the entire Concordia Athletics Department! 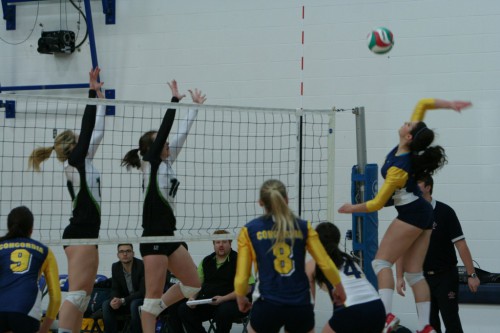