The Concordia Thunder Women's Soccer team may have lost a battle on the weekend but they have 'won the war', assuring themselves a second place finish and a berth in the ACAC Championships. On Saturday, the Thunder faced off against the Ooks at NAIT in what should have been another classic battle between the two ACAC North archrivals.  It was a sunny afternoon with all the familiar ambiance of a playoff matchup.  Then the whistle blew to start the game and the only evidence of anything classic following the start was a Tim Horton’s marquee standing tall over one of its franchises across the road from the field. Right from the start, the NAIT women bullied their way at will and Concordia was crushed under that charge, conceding goals in a domino fashion and finishing the half down 5-0.  “If one were to look at the first half stats in percentile, in particular to winning the first ball or the second, our numbers would be appalling; probably single digits,” said Coach Imbrogno.   However, the second half stats were the polar opposite.  The CUCA women transformed themselves and came out fighting. They battled and won the majority of loose balls and more importantly brought forth an element of the game that has been absent the whole season; a physical brand of competiveness.  “Players need to get stuck in to send a message to the opposition and also to rally their own teammates.  It’s not anything illegal but playing aggressive is paramount.”  It started with first year player Maggie Boras going in hard to tackle a NAIT player who had earlier fouled Maggie, but was missed by the referee.  That spurred on the rest of the Thunder ladies and collectively they played a high pressure and physical style of play that had been missing from much of the rest of the season.  “You could have all the talent in the world, but if you don’t have the will to compete then it’s a waste of that talent.”  Concordia were the aggressors in the second half and created several chances but were unable to score.  They did keep the home team at bay and eliminated their opportunities. The game ended in a 5-0 loss, but watching the women after the match, it looked as if they had won the game.  It had nothing to do with the score; it was the battles that they endured in the second half that they were excited about and that they had created something they could build on.
The following day, the Thunder travelled to King’s University College for an afternoon match that held playoff implications for both teams.  A win or a tie by Concordia would seal a trip to the ACAC Championships. With that thought in mind, the Thunder Women scored three goals to advance to the post season.  Brittany Boe and Kalie Berezowski scored the first two goals with veteran Alexa McGillivray nailing the third goal of the game to solidify the win.
The Thunder have one game remaining.  After the traditional Thanksgiving bye week, the Thunder will play their final home game on October 18th versus Keyano College. 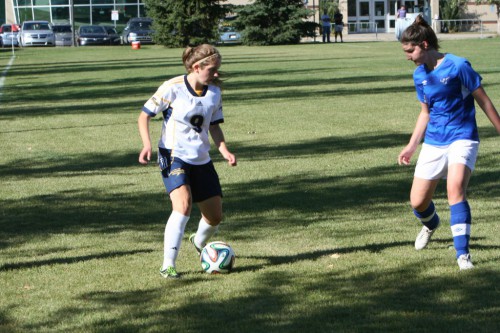