The Concordia Women’s Curling team made Thunder Athletics history this past weekend, bringing home a CCAA National Silver Medal.  Overall, the Thunder Women’s Curling team “had a blast” at the 2017 CCAA National Curling Championships which were hosted by the ACAC’s Augustana Vikings in Camrose. The woman started off the competition on Wednesday, March 23rd winning their first 2 games 6-2 vs the Augustana Vikings and 3-2 over the Red Deer Queens. After attending the National Championship banquet on Wednesday evening, the ladies started off their second day with 2 tough games, losing 10-8 to the Lakeland Rustlers and 7-6 to the OCAA’s Niagara Knights.  However the Thunder ended the day on a positive note, posting a solid 7-4 victory over the the Humber Hawks. On Day 3 of the competition, the Thunder knew they needed to win to clinch a spot in the playoffs. In their first match up of the day, the Thunder came out with a bang and beat the NAIT Ooks 9-4. The final game of the round robin portion of the tournament saw the Thunder go up against the Fanshawe Falcons who were undefeated with a 6-0 record. The girls were ready to play this very impressive team and won a hard fought battle 7-5, finishing with a 5-2 record and 2nd place in the standings. Saturday was the double-header playoff finale and Concordia matched up with the NAIT Ooks in the first playoff round. The girls came to play as they beat NAIT once again 8-7 to move on to the Gold Medal game.
The Gold Medal tilt put the Thunder face-to-face once again with the Red Deer College Queens. RDC were one of the toughest teams the Thunder had to compete against during regional play all year. Both teams were at the top of their respective games and the decision came right down to Concordia’s very last stone in the 10th end. The Thunder needed to bump Red Deer’s rock out of the house to force a hard shot on the opposing Skip.  Sadly, the rock was just a little too light and it gave Red Deer the win and Concordia National Silver. Head Coach Dylan Theroux had this to say about his team’s remarkable achievement. “Being (that this is) the first time that Concordia has ever sent a Curling team to Nationals, this (outcome) wasn’t too bad! The girls played very well this week. They came to compete and played every game as hard as they could. Our goal at the start of the year was to perform and compete to the best of our abilities and I would say we did just that. They deserve this medal and worked extremely hard to get it. Next year, they’ll be aiming to get Gold at this National event. I couldn’t be happier to be their Coach. I enjoyed every minute of practice and competition even though they stressed me out at some points,” chuckled Theroux. “I am excited to see what these athletes can achieve next year as they build and mold their skills to perform at the higher level.”
Later on he said he was very happy to see his Mixed team drive all the way to support their fellow athletes. “These kids became great friends, being able to practice and play beside each other all year around. They will forever be Thunder Buddies as they move on in their lives.” Theroux concluded his comments stating “this is just the beginning of a new era where Concordia will be a top competitor at the national level for all who play them. I want to keep the bar set high for next year as Concordia Curlers will be a force to be reckoned with.” Theroux is starting to look for competitive curlers for next year’s competition. His aim is to have a full Women’s and Men’s team and if there is enough interest, a Mixed team as well.
Congratulations to Spare Brooke Gelasco, Lead Madysan Theroux, Second Jessica Panchyshyn, Third Adrienne Maschmeyer and Skip Veronica Maschmeyer on being this season’s Canadian Collegiate Silver Medalists! 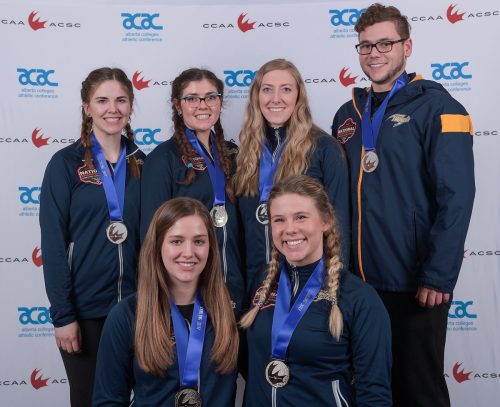