This past weekend the Thunder Women’s Basketball team headed over to NAIT for a pair of Ooks home games. On Friday night, the Thunder were looking to better the results from the week before even knowing that NAIT has the experience and depth to be a top ACAC contender this season.  The game started with an aggressive attack by the Ooks but the Thunder pushed back with force. “Our motto is to be better every weekend; better than the last," stated Coach Robbie Valpreda. "We have to make improvements incrementally. That way as the season goes on, we will be where we want to be. That philosophy showed on Friday.  We supported each other; high fives, communication and most of all we won the hustle plays. Taking charges, getting after loose balls; these are things a coach loves to see." At the half, the Ooks lead 41-22. Coming out for the second half, the Thunder were still in a good position to make a comeback. “Even though the score didn’t show it, the results (of the Thunder's hard work) were better. We struggled on turnovers; we have to better with the basketball. Our decision making has to be better, but with a young team these are growing pains,” concluded Valpreda. The final score was 76-49 for the Ooks.  “I was happy with the game overall. We battled, we stuck together, we hustled, we rebounded, we were better than last week.”  Veteran leader Meagan McIntosh was named the Player of the Game.
On Saturday, the Thunder were back at NAIT for a second straight night but this time the game was different. “Being better than before, making the adjustments and still playing together; that was our talk before the game." The Thunder came out looking to avenge the loss from the night before and found themselves up 16-10 after the first quarter. “We were awesome,' enthused Valpreda. "We made better decisions, we hustled again and we were having fun!” The Thunder were getting results from everyone on the court and this infused the whole team with an enthusiasm to play better basketball. With that spirit, the Thunder were up 31-24 at halftime. “The first half was for us was better than any of the three games we've played so far this season. We did a lot of good things; our FG percentage was up, defensive rebounding was better and most off all, our free throw percentage was excellent because the Thunder got to the line and were consistent there." As the second half began, the level of intensity went up for both teams and NAIT began playing with a greater sense of urgency. “We knew they would come out playing fiercely and that they weren’t going to yield.  We regrouped and collected ourselves and managed to maintain our lead. With a young team, this is great to see. We're learning and I can see the results,” said Valpreda. Going into the last five minutes, the game was knotted up at 50 apiece. “These moments are where we have to see character and leadership. As frustrating as it can get we have to get through the adversity.”  With their greater experience winning out, NAIT made a strong push at the end to take the game 63-50.
“In the fourth quarter they outscored us 21-5; that hurts. But in the end – as frustrating as it was – there were a lot of positives. We showed we can play with anyone. The girls definitely have confidence now," concluded Valpreda. Another veteran who is having a breakout season thus far – Aly Bridgeman – was selected as the Player of the Game.
The Thunder's next action will see them head to Camrose for a rare Thursday night match up with the Augustana Vikings before returning to the confines of the Ralph King on Saturday night.  Both games tip off at 6 PM. 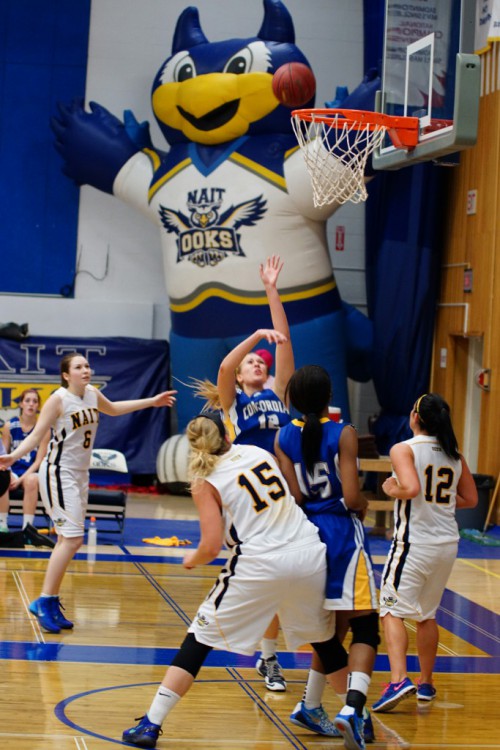