The Thunder Men's Volleyball squad was up in Grande Prairie for two matches against a young but talented Grand Prairie Wolves team this past weekend. The guys came out slowly on Friday, losing the first set and making too many errors.  However, they bounced back in the next three sets to win the match 3-1 (16-25, 25-21, 25-15 and 25-23). Connor Reeves played a crucial role in the victory but unfortunately suffered a dislocation of a finger on his left hand. Ryan Teliske came off the bench for sets 2-4 and played excellently, which got him the Player of the Game award for Friday night. Saturday was a different story as the guys looked sluggish for the whole match, losing in 3 sets. Keenan Forstey was the Player of the Game on Saturday. "Overall an ok weekend for the guys, but we did miss an opportunity to get the program's first weekend sweep in quite some time", lamented Coach Jacobson.
MVB is back next weekend against another young team in the Augustana Vikings.  The home tilt will go Saturday night at the RKAC. 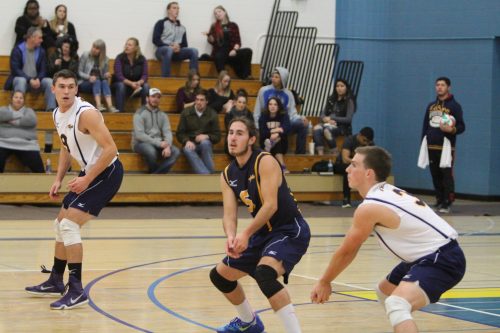