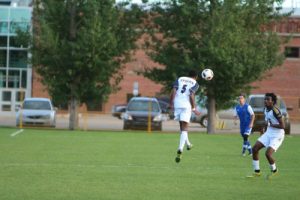 The Thunder Men’s Soccer team opened their 2016 ACAC campaign this past weekend, putting 3 of a possible 6 points into the ledger. Friday night’s home opener saw the boys fight back twice to overcome an improved King’s side, 4-2. Ahmed Abubaker got the hat trick and earned the ‘Man of the Match’ title. On Sunday the Thunder hosted NAIT on an unseasonably cool & inhospitable day. Despite coming up short 4-1, the boys showed they are not far away from the top sides. Unforced errors plus a missed penalty were the difference against a savvy and bigger NAIT squad.

Next up for the Thunder will be the annual away trip, this year to Grande Prairie to face the GPRC Wolves on September 17th and 18th.