The 2014-15 edition of the Concordia Thunder Men's Hockey team took to the ice for the first time this season, playing a pair of exhibition games on the weekend under new Head Coach Dan Glegloff. The team got off to a slow start on Friday night in Wetaskiwin vs Augustana, dropping an 8 to 1 decision to the Vikings. A highlight of the game was 1st year D-man Ryley Rimmer scoring his first college goal in his first game.
Saturday night the Thunder looked more energetic and defeated the MacEwan Griffins by a score of 4 – 3. The winning goal was scored by first year D-Man Nick Tupper and Fil Kejdana and Jordan Hoffman each had 1G and 1A. Goaltender Joel Wilson picked up the win with a 41-save performance.
The Thunder will conclude the pre-season this coming weekend when they will host a pair of games against the Keyano Huskies.  The puck drops for game 1 at 8:15 PM on Saturday, September 20th and on Sunday afternoon at 12:45. Both match ups are at Glengarry Arena. 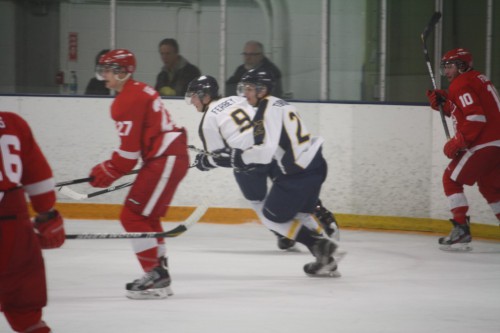