The Thunder kicked off the second half of the 2014-15 ACAC season with a pair of home games against the CCAA's #2 nationally ranked NAIT Ooks this past weekend at the RKAC. The boys would start slow but bounce back from a 15-3 deficit and tie the game at 15 on a Ryan Coleman fast break slam.  The two teams would go back and forth into the half with Ooks holding a 2 point edge. Another slow start to the second half put the Thunder down 14 late in the third but the boys showed resiliency highlighted by 9 straight points from newcomer Jason Jones Jr. who capped his 1 man run with a 4 point play that cut the NAIT lead to 3 with 3 minutes to play.  Unfortunately for the Thunder they couldn’t find the bottom of the net for 2 of the final 3 minutes and dropped game one to the Ooks by a final score of 94-80. Ryan Coleman was big as usual for the Thunder dropping 28 points and adding 11 rebounds for his 9th double-double of the season. Point Guard Artez Scharer kicked off his second half with 26 points, 3 rebounds, 4 assists and 3 steals.  Jason Jones Jr. added 9 points in his Thunder debut. “We can't spot a team as good as NAIT double digit leads to start games/halves,” remarked Coach Reagan Wood after the loss. “We had opportunities to come all the way back but every time we got close, NAIT would hit a big shot and keep us at arm's length.  They shot the ball very well today so a lot of credit to them for making key plays to keep their lead.”
Game two would bring a playoff atmosphere to the RKAC as both teams played a physical affair.  The Thunder would find themselves down 14 at the break but a more consistent defensive effort saw the Thunder cut the Ooks' lead down to 3 points again with under 3 to play.  The Thunder have been the best free throw shooting team in the nation all season but their greatest strength would prove to be their undoing in this one, missing 12 from the charity stripe as the Thunder again fell to the Ooks 97-89. Another big day from Ryan Coleman led the Thunder in scoring and rebounding with 23 and 13, his 10th double-double of the season.  Artez Scharer again had a nice line scoring 14 while adding 5 rebounds and 6 assists.  Rob Haack tallied 13 points with Nate Wojcicki chipping in 12 along with 9 rebounds.  Ryan McLaren was big off the bench with 11 to round out the double digit scorers for the Thunder. “We again had a shot to pull this one even and we came up just a little short,” said Coach Wood “I was happy to see how we battled in a very physical game for 40 minutes.  We have some young guys who gained a lot of valuable experience this weekend against an older, more experienced NAIT squad.  We can see that we have a lot of potential but have to limit our mistakes against the best teams.”
The Thunder will face the Lakeland Rustlers next weekend with the Friday game out in Lloydminster and the rematch back at the RKAC on Saturday.  Both games go at 8 PM. 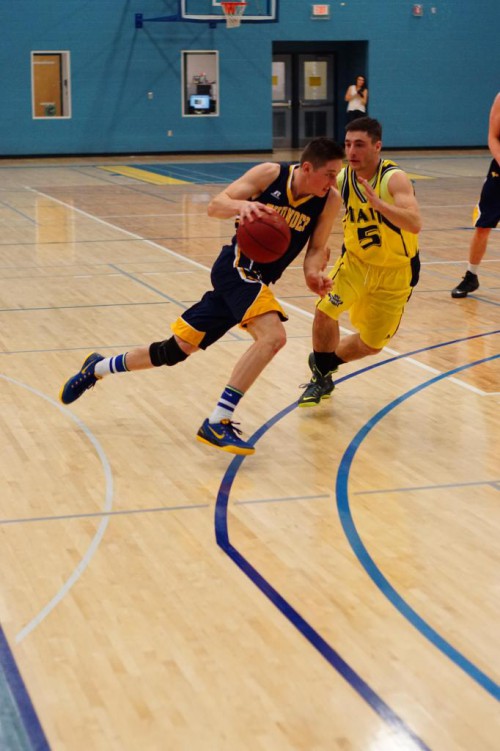