The Thunder Men's Basketball team opened the second half of the ACAC North schedule with a tough two game set against the Lakeland Rustlers.  The Thunder and Rustlers were tied with 20 points with the Thunder having two games in hand and the head-to-head wins in the previous two matchups. Game one at the RKAC saw the Thunder grab a 5 point halftime lead but let the Rustlers comeback and hold a 5 point lead of their own heading into the 4th quarter.  The Thunder would dig deep and win the final frame by a 32-14 margin pulling out the 84-71 win. Leaders for the Thunder – Ryan McLaren with 19 points, Kwame Kang with 14, Brett Jakubec with 13, Mike Malin with 12 and Euriah Pemberton with 11.
Game two out in Lloydminster would see the Thunder go down as many as 14 points to the Rustlers but would not fold and in the end were able to come back and defeat the home side by a final score of 79-73. Leaders for the Thunder – Ryan McLaren with 22 points and 6 rebounds, Brett Jakubec added 14 points, 9 rebounds and 6 assists, Kwame Kang notched 13 with Will Pittman adding 8 big points off the bench. “Great way to get the second half of the season rolling,” remarked Coach Reagan Wood after the wins. “When we have balance and effort we are able to overcome a lot of obstacles.  Lakeland is a great team that we are battling with for the division title this year so to be able to go 4-0 against them is unbelievably huge for us.  We have to maintain our focus and energy the rest of the way.  Every team in our division is dangerous; each game is a battle.”
The Thunder will welcome the Keyano Huskies to the RKAC this coming weekend for a two game set.  The Thunder took the first two games of the season series in Ft. McMurray in October. Tip off times are Friday night at 8 and Saturday afternoon at 1 PM. 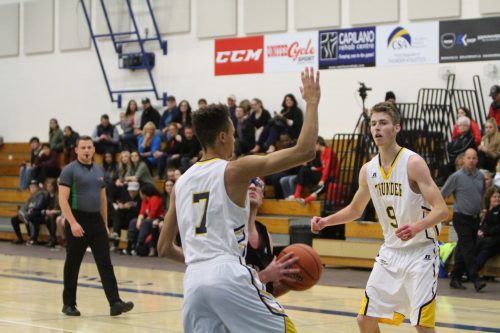