This weekend the Thunder had a pivotal match up against the Portage College Voyageurs. Going into the weekend the two teams were tied for the last playoff spot which set up an exciting series. On Friday night the Thunder were in Lac La Biche. The Thunder struggled to find their legs in the first 2 periods and despite goals from Romano Morrison and Adam Wheeldon they trailed 3 to 2 going into the third. However, they came out flying in the third period with 2 power play goals from Jordan Busch and Brady Bakke. Jacob McNutt would record the eventual game winner later in the period and the Thunder added two empty net goals to win 7 – 4. Tanner McCorriston made 34 saves in the win.
Saturday night on home ice and with a chance to sweep the weekend set, the Thunder came out fast. Brady Bakke scored twice in the 1st to take a 2 to 0 lead. In the second period the Thunder got two shorthanded goals on the same penalty from Ian McLellan and Jordan Busch. The rest of the way Adam Moghrabi added 2 goals, Romano Morrison scored on the power play and Chase Fallis added another goal late to help the Thunder to a dominating 8 to 0 win. Rookie Tanner McCorriston continued to shine in the net picking up his second shutout of the year. “The boys played hard all weekend and it was nice to see them get rewarded with a big performance tonight,” said Associate coach Matt Parks. “We have a long way to go but this team is maturing and learning how to put together a 60 minute game,” he added.
The Thunder look forward to continuing their playoff push as they face the Augustana Vikings this coming weekend. The home game goes Saturday night at Clareview with the puck dropping at 8:15 PM. 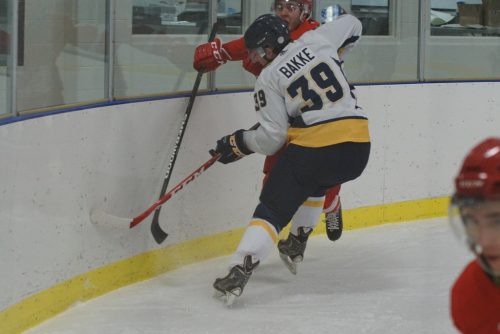