The Thunder Men’s Basketball squad hit the road up to Fort McMurray this past weekend for two games with the #12 Nationally-ranked Keyano Huskies.  The Thunder came out of the blocks well, jumping out to a 7-0 lead and forcing an early Huskies timeout.  The home side would respond and hold an 18-15 lead on the Thunder at the end of one.  A slow second quarter saw the Thunder go down 40-29 heading into the half.  The Thunder would come out strong in the 3rd and cut the Huskies lead to 2 at 49-47.  A foul plagued 4th frame would be the Thunder’s undoing as they dropped the first game 77-63 to the Huskies. Leading the way for the Thunder was Adam Johnson with 19 points.  Artez Scharer added 13 to go along with 7 assists. Jason Jones Jr. rounded out the double digit scorers with 10.
Day two would see the Thunder start slower then come rushing back in the 2nd quarter and take a 42-41 lead going into half.  A back and forth 3rd allowed the Thunder to take a 60-58 lead into the 4th.  Both teams battled hard in the final frame and the Huskies were able to overtake the Thunder and hold on for the 88-82 win. Leaders for the Thunder were Adam Johnson with 17 points and 10 rebounds, Artez Scharer matched Adam with 17, Nate Wojcicki potted 13, Jason Jones Jr. 11 with Mike Malin and Euriah Pemberton coming in off the bench to both add 8. “This weekend we really wanted to take strides in the right direction as a team,” said Coach Reagan Wood. “We had been struggling in several areas and I thought the things we were able to do against a very good basketball team in Keyano were great.  Sure, we still made some mistakes at critical times but the learning that took place will be crucial for us going forward.  We have big games with a very good NAIT squad this coming weekend and the steps we took at Keyano will help us be better prepared to compete with the Ooks.”
The home game for this final weekend of first semester basketball action will go Saturday night at 8 PM. 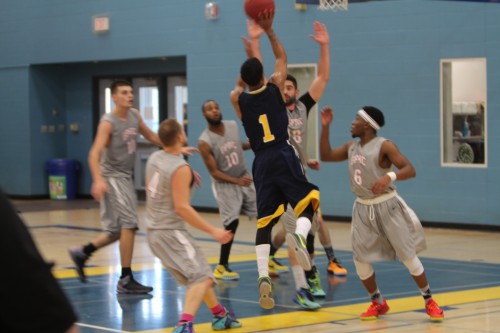