This weekend the Thunder Hockey team competed in the ACAC playoffs for the first time in 4 years. The Thunder opened up the series with Game 1 taking place in Calgary at SAIT Arena. The Thunder drew first blood on a goal by leading scorer Ian McLellan. The Trojans responded quickly however with 2 back-to-back goals and kept the lead heading into the second period. The second period continued with SAIT carrying the play and stretching their lead with 2 more quick goals mid-way through the period. Chance Thomas responded with a goal for the Thunder but that is as close as Concordia would get. SAIT would add an empty net goal in the third frame making the final score 5 to 2.
On Saturday night the Thunder returned home for Game #2. Adam Moghrabi opened the scoring early in the first for the Thunder on a partial breakaway. SAIT would respond to tie the game but the Thunder would take a 2 to 1 lead with 2.6 seconds left on a shorthanded goal by Chase Fallis. SAIT would tie it in the second but the Thunder would once again take the lead on a beautiful goal from Rory Davidson. After SAIT tied the game in the third, the game would head to sudden death overtime. Unfortunately for the Thunder, the Trojans scored just 23 seconds into the extra frame to win the game and the series.
Despite the loss to the Trojans the Thunder took a big step this season with their return to the ACAC playoffs. Coach Dan Glegloff reflected on the season; “We came a long way this year in establishing our culture and the way we want to play. The exciting thing about our team is that many of our leaders are just beginning their university hockey careers. With another strong recruiting class, our school and fans can look forward to more successful playoff runs in the future.” 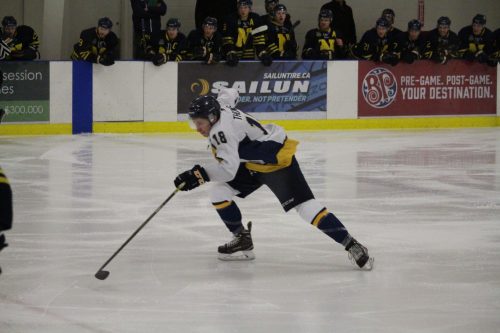