This weekend the Thunder Hockey team took to the road for their longest trip of the season, traveling to Caronport, Saskatchewan for a weekend set against the Briercrest Clippers. On Friday the Thunder struggled to overcome their 'bus legs' and fell behind early and had to play catch up hockey all night. The Thunder got better as the game wore on and the top ranked power play in the ACAC was able to erase a 2 goal deficit in the 3rd period with goals from Adam Wheeldon and Brandon Halls. However the Thunder's bad luck in overtime did not change as the Clippers were able to earn the extra point in a 5 to 4 game.
On Saturday the Thunder were excellent right out of the gate and played the majority of the first and second periods in the Clippers zone. However, the Thunder only held a 1 to 0 lead heading into the final frame. In the 3rd period the Thunder were able to finally solve the Briercrest goaltender and came away with a 4 to 1 victory. Connor Dobberthien got the win in goal for the Thunder in his first game against his former team.
The 3 points on the weekend helped the Thunder to leap over 3 teams in the tight ACAC standings and now sit in 5th spot by a single point. Next week the Thunder will face a big test in the undefeated NAIT Ooks in a pair of games on Friday and Saturday. The home game goes at Clareview at 8:15 PM on Friday the 13th! 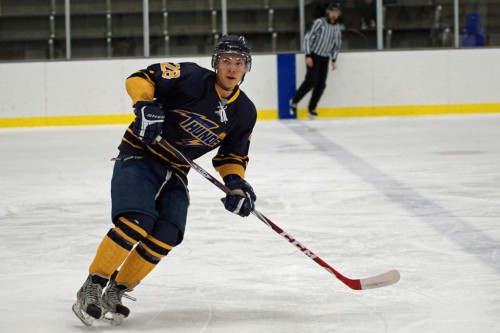