Thunder Hockey Drop Two to RDC but are Playoff Bound

This weekend the Thunder dropped a pair of tightly contested games to the RDC Kings, but in spite of that result will be contending for the ACAC Hockey Championship for the first time since the 2012-13 season.  Friday night at home, the Thunder were tied 2 – 2 late in the third and the game looked to be headed to overtime. However, that all changed when RDC capitalized on a defensive miscue by the Thunder with just 14 seconds left, handing the Thunder the 3 to 2 loss. Rory Davidson and Jordan Busch were the goal scorers for the Thunder.
Saturday night the Thunder played well again but could not solve the King’s goalie. The Thunder would get a goal from leading scorer Ian McLellan but eventually drop a 4 to 1 decision to RDC.
Next weekend the Thunder will take to the ice in the playoffs for the first time in 4 years. The best of 3 series against SAIT will begin on Friday in Calgary. The Thunder will host Game 2 on Saturday. Coach Dan Glegloff spoke about the upcoming series vs. SAIT. “They are a strong team and it will take a great effort from us to have success. We have come a long way as a team since we last played them and our team is very excited to have the chance to compete in the playoffs.” 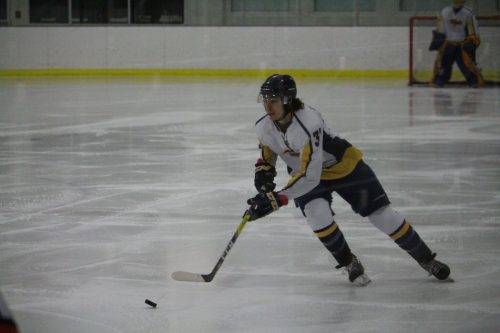