This weekend the Thunder took on the top ranked NAIT Ooks and dropped a pair of decisions 9 to 2 and 9 to 4. On Friday night at home, the Thunder struggled early and allowed 5 first period goals to the Ooks. Despite a good effort in the remaining 2nd and 3rd periods, the Thunder could not claw their way back into the game. Saturday night at NAIT, the Ooks got off to another fast start, jumping out to a 3 to 0 lead. The Thunder were able to fight back and send the game to the third period tied at 3. In the third period, the Ooks went ahead for good and added some late goals to make the game look much worse than it actually was for the Thunder.
A positive from the weekend was that the Thunder power play continued to find the net, scoring 3 goals on the league's top PK unit. Adam Wheeldon also continued his strong rookie campaign with 4 points on the weekend. Next weekend the Thunder host a pair of very important games against the Keyano Huskies. Game times are Friday night at 8:15 and Saturday afternoon at 4:30. 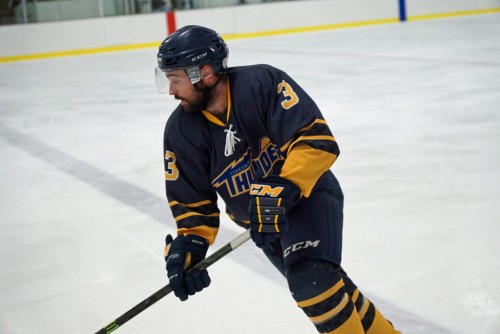