The Concordia Thunder Curling team iced a full Men's and Women's team this past weekend in the ACAC Fall Regional Play down in Camrose. The Thunder Ladies team consists of 2nd year skip Willow Frissel, 3rd Brooke Gelasco, 2nd Bailey Gardecki and lead Jennifer Martinoski.  "The competition in the ladies' division is very strong this year, with several teams made up of past provincial medal winners," said 4th year Head Coach Rick Mann.  Game 1 put the Thunder Women up against Lakeland and with the exception of one end, the Thunder stayed right with them, forcing the Lakeland Skip to make her last rock to win 7 – 6. The ladies came up a bit flat in the next 2 games, losing to NAIT and Grant MacEwan, both with lopsided scores.  Next up was Olds and this was a much better effort, especially from 2nd Bailey Gardecki, who was instrumental in setting up several ends to position the team to score.  This game went into extra ends, ending when the Olds Skip made a terrific tap-back to sit with 1 rock behind cover in the 4 foot circle, counting the 1 point necessary to win.   Going back onto the ice with only a 10 minute break, the Thunder Women came out firing on all cylinders beating Portage soundly in only 3 ends to finally get themselves into the win column.
The Men’s team consists of Skip Jason Ferster, 3rd Konnor Wood, and new curlers 2nd Tyler Ludwig, and Lead Andrew Koning.  "With 2 brand new curlers, the men were hard pressed to generate scoring opportunities throughout the weekend.  Our best game came against NAIT on Friday evening," summarized Coach Mann.  The Thunder Men played an excellent game, keeping NAIT to only 1 point on each of the ends that they did score on but unfortunately, the Thunder were unable to generate their own scoring chances.  The Thunder lost the contest by a score of 4 – 2.
A plant failure at the curling club on Saturday evening created ice problems that forced the cancellation of all of Sunday’s games,  All cancelled games will be made up during the Winter Regional play downs, which will be held in Edmonton (hosted by NAIT) at the Avonair Curling Club on January 31- February 2, 2014. 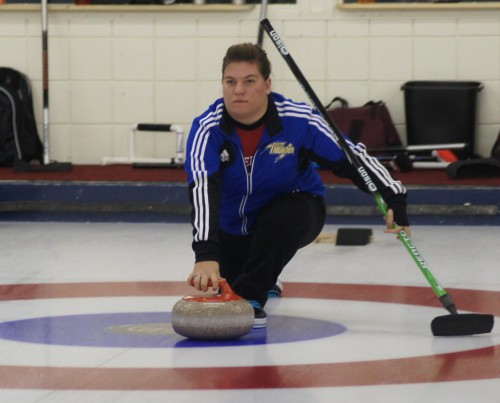