Thunder Badminton ‘Shoot the Lights Out’ at the ACAC Championships!

The Concordia Thunder Badminton team played host to the rest of the ACAC this past weekend, staging a very successful 2014-15 ACAC Badminton Championship Tournament.  It all started on Friday Night with the ACAC Badminton Awards Banquet hosted by Concordia and held at the Highlands Golf and Country Club.  The Thunder had four players named to the ACAC All-Conference Team.  On the Female side, the Thunder boasted Rachael Smillie and Lindsay Ross.  On the Male side of the equation, Andre LeBlanc and Coady Duncan carried the banner for the Thunder. In a remarkable coup, Rachael Smillie also took home the prestigious Female Athlete of the Year award for Badminton.
The Thunder fell just short in the overall team competition, finishing 2nd behind the NAIT Ooks. However, the Thunder had some incredible results on the individual side during league play.  Overall, the Thunder won an amazing 3 ACAC Individual Gold Medals and 5 ACAC Individual Bronze Medals.  This feat bested all the other competitor schools by a 4-medal margin; a superlative showing for the Thunder!
On Saturday morning, the Championships competition kicked off with the Men's and Women's Doubles categories, wherein the Thunder captured two ACAC Bronze Medals.  Graduating players Coady Duncan and Andre LeBlanc defeated a team from Olds to finish 3rd on the Men's side while on the Women's side, another graduating player, Erin O'Neill and 3rd year player Lindsay Ross took home the Bronze.
Next up were the Men's and Women's Singles events.  The Thunder dominated these events with Connor Reinson and Rachael Smillie both taking home Gold Medals.  Third year player Connor handily defeated a player from NAIT in the finals, 21-6 and 21-10.  Second year player Rachael won a thriller over the player/coach from Olds, Mary Smith.  Rachael lost the first game 21-15 but won 25-23 and 22-20 in the final 2 games.
The last event was the Mixed Doubles.  Grads Andre LeBlanc and Erin O'Neill won the Mixed Doubles final with a convincing 21-9, 21-11 two-game victory over a team from Olds.  Two more graduating players – Coady Duncan and Willow Frissell – battled against all odds and won the Bronze Medal.  The pair were the #1 seeded mixed team going into the tournament but Willow had an unfortunate injury occur right at the end of the Women's Doubles event.  It was later discovered that Willow had a dislocated knee cap but she continued to play and battled through the pain. As if that wasn't enough, she was also playing with a broken toe.  Against all the odds, Duncan and Frissell managed to pull out a Bronze Medal, losing a very close match in the semifinals to a team from Olds.
In an unprecedented display of talent for the Concordia Thunder Badminton Program, the team won 3 of the 5 events at the ACAC Championships and as a consequence, will be sending FIVE athletes to the CCAA National Championships to be held in Halifax, Nova Scotia from March 5th to 7th.  The ACAC will be sending 2 teams this year because they were awarded the Wildcard.  For the Thunder, Connor Reinson, Rachael Smillie, Andre Leblanc and Erin O'Neill will be representing Team ACAC in the Singles and Mixed categories.  Lindsay Ross will be competing on the Wildcard team for the ACAC in Women's Singles.
Congratulations to everyone on our Thunder Badminton team and GOOD LUCK to our athletes heading to Halifax!! 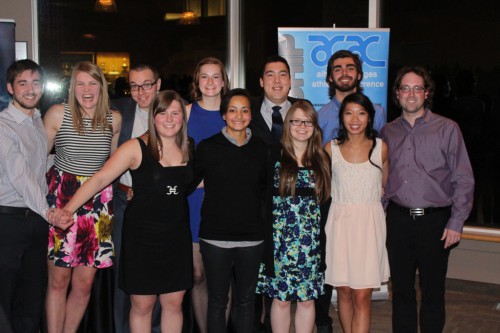