Last night, the Concordia Thunder Athletics community celebrated this past year's achievements and outstanding performances at the 2013-14 Thunder Athletics Awards Banquet.  The banquet was held in the Robert Tegler Student Centre and was attended by over 160 Thunder Athletes, Coaches and Concordia Dignitaries.

On the Women's Soccer side, Jillian Sander started things out as Rookie of the Year.  Next up, Chantal Menard was feted as the Most Dedicated Athlete and also took the Outstanding Scholastic Athlete honours. Fifth year stalwart Audrey Sydora was named the Most Valuable Player and acknowledged for playing all 5 years of her eligibility in a Thunder uniform. Shauntel Lengle also received recognition for playing her entire 5 year career at Concordia and both Audrey and Shauntel were joined by Laura Jubinville being recognized as Graduates.

The Women's Basketball team kicked off their portion of the evening naming Shyanne Walton as their Rookie of the year. Next up, 3rd year veteran Meagan McIntosh was selected as the Most Improved Athlete.  The Outstanding Scholastic Athlete award went to team Captain Railene Hooper who was also acknowledged as the team's lone Graduate.  Rounding out the winners, Karolina Wieczorek took Most Valuable Player honours.

The Nationally 7th-ranked Men's Basketball team took to the stage next.  In a rather unusual – but entirely understandable – turn, the team named two players as co-winners of the Most Dedicated Athlete; fellow 5th year veterans Jamaal Bucknor and Dallas Wright.  The team's Outstanding Scholastic Award also went to Dallas Wright.  The team's 3rd, 5th year player David Shantz earned Most Valuable Player honours and all three – Jamaal, Dallas and David – received acknowledgement for being 5th year athletes, with Dallas receiving special recognition for playing his entire career at Concordia.  Seemingly the man of the hour, Dallas – along with 4 year veteran Nathaniel Wojcicki – were acknowledged as Graduates. Finally, Jamaal Bucknor and David Shantz were recognized for being selected as ACAC North All-Conference players.

With Indoor Track becoming an official ACAC sport this season, the XCR/IT team boasted a large number of winners this season. Shelby Edgar kicked off the winners circle, picking up the award for Most Improved Athlete (Female) while 2nd year vet Ben Thomas earned the same award on the Male side.  Kevin Chambers was named as the combined teams' Most Dedicated Athlete and also earned kudos as the Outstanding Scholastic Athlete. Earning a CCAA National Bronze Medal this season helped propel Marriya Jenkins to being named the Most Valuable Athlete (Female) while 4 year veteran and Team Captain Joel Perren was named as the Most Valuable Athlete (Male). Marriya Jenkins was right back up to the podium and received acknowledgement and awards for being named (for the third consecutive year) as an ACAC All-Conference athlete and as Concordia's lone CCAA Academic All-Canadian. Joel Perren, along with 2nd year veteran Beverly Kaine were recognized as Graduates.

The Badminton team kicked off their portion of the evening by naming two-sport athlete (Badminton and Hockey) Connor Reinson as the Most Improved Athlete. Alysha Berkner was honoured as the Most Dedicated Athlete and Alysha, along with teammate Erin O'Neill were co-winners of the Outstanding Scholastic Athlete award. First year player Rachael Smillie was named the team's Most Valuable Athlete.

The Curling team also saw their ranks bolstered this season, icing both a Men's and Women's squad. CSA President and 1st year curler Andrew Koning was chosen as the Most Improved Athlete. For the second year in a row, the Outstanding Scholastic Award went to Women's team Skip Willow Frissell. Willow was also honoured as this season's Most Valuable Athlete.

Boasting the largest team on the dais as always, the Men's Hockey team kicked off their portion of the evening naming rookie Kegan Bowman as their Most Improved Athlete. Next up, veteran and Assistant Captain Tyler Stevenson was selected as the Most Dedicated Athlete. While boasting a perfect 4.0 average (again!), Pat Turville was named as the Outstanding Scholastic Athlete for the 2nd year in a row.  Most Valuable Player honours were given to team scoring leader Jordon Hoffman. Rounding out the presentations saw two, 4 year veterans – Pat Turville and Daniel Ziegenfuss – recognized as Graduates.

On the Men's Volleyball side, Connor Reeves led the awards parade being named the team's Most Improved Athlete. Next up, 2nd year Libero and ACAC Digs leader Matt Fulton was awarded the trophy for Most Dedicated Athlete. First year player Owen Woycenko collected the Outstanding Scholastic Athlete Award while team Captain and veteran Setter Alex Ingstrup was named as the Most Valuable Player. Rounding out the awards, Matt Fulton received acknowledgement as the first Thunder Men's Volleyball player to be named to the ACAC All- Conference team.

In her third year as a Thunder Official, Jensen Evtushevski was feted as this season's Minor Official of the Year. Jensen has filled multiple roles over the course of her service to Thunder Athletics and filled both Score Sheet and ScoreClock Operator for Basketball and served as DakStats Assistant for Thunder Volleyball.

In a season of changes, four veteran Thunder Coaches have elected to move on to other things and their accomplishments and service to Thunder Athletics was acknowledged and celebrated by a presentation from each of their respective Team Captains.  First up, the Men's Soccer team Captain James Sousa payed tribute to Coach Sasha Samadi (2003-2014). Next up, Hockey Captain Pat Turville paid tribute to Coach Dan Peacocke (2009-2014).  Women's Volleyball was next on the dais as Captain Bailey Magas feted Coach Sherri Milne (2009-2014). Finally, Captain Alex Ingstrup presented the compliments of the Men's Volleyball team to Coach Joel Mrak (2011-2014).

CONGRATULATIONS to all of our honourees and to ALL of our Thunder Athletes on a job well done!! 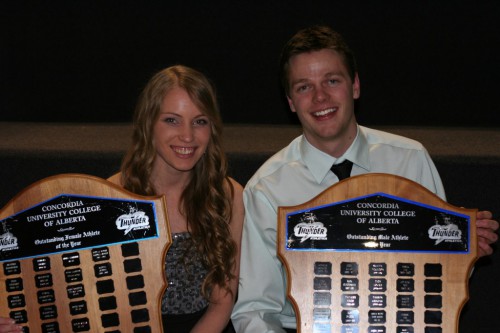