The Thunder wrapped up their 2016 preseason schedule with two wins over Burman University – 102-59 on Thursday in Lacombe and 89-53 on Saturday back in Edmonton.  Sandwiched in the middle on Friday was the 1st Annual Thunder Men’s Basketball Alumni Tournament which was a huge success.  30 Thunder Alum came back for the event and showed they could still play!  The current Thunder – using a split squad – was able to hold off the 2005-2010 Thunder Alumni in the final.
“We’re very grateful for so many Alumni coming out for the event.  Several travelled in from out of town to be here and come play some ball.  Having so much support from our past players is awesome and means a lot to me as a coach and I know the current players were happy to meet some of the greats from year's past.  I’ve been lucky enough to be a part of the program for 10 years now so to see so many guys who I’ve had the pleasure of coaching again was special.  We hope to build on the success of this event for next year and have even more guys out!” – Reagan Wood, Head Coach, Thunder Men’s Basketball. 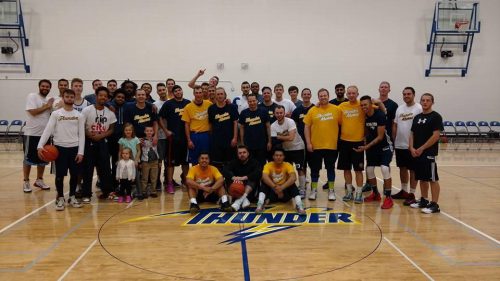