This Friday night the Thunder Women's Basketball headed across town to face the veteran-laden NAIT Ooks in the first of a home-and-home series.  The Ooks shot out to an early lead but the Thunder battled back and were themselves leading for a short time. However, as the game progressed the veteran Ooks started to apply the pressure and with their tough defense, the Thunder found themselves turning the ball over on almost every offensive play. “We panicked," stated Head Coach Robbie Valpreda. "We know that the Ooks do one thing well and that’s play pressure defense. They like to sit in a zone and make the opposing team make the mistakes and that’s what we did.”  On the other hand, the Thunder did an excellent job with their own half-court defense and the Ooks struggled as well to get a basket. Unfortunately the Ooks did take advantage of the Thunder turnovers, scoring in the fast break on numerous occasions.  One positive note for the Thunder was the play of Ann Stewart.  She did an excellent job of limiting NAIT's post play. However, with the other weapons they have at their disposal, the Ooks capitalized on all the Thunder turnovers and cruised to a 66-35 win. Player of the Game went to Sofia Luccadello with 12 pts.
Looking to bounce back from Friday's performance, the Thunder took to their home court on Saturday night knowing that they needed to come in with much better effort and hustle. The Thunder put their intentions into practice and took the early lead, looking rejuvenated from the previous night. Concordia really limited their turnovers as well in the early going, getting to the rim and drawing fouls, but it was their performance from the free throw line that would hurt their chances of staying close with Ooks. “As a team, we are doing an excellent job with our defense but on the offensive side, we need to capitalize at the rim on opportunities (that) we get.”  At the half, the Thunder found themselves down 30-16. In the second half, the Thunder started to play with more emotion and battled with the Ooks every possession. The hustle and heart was there but once again the Thunder could not put the ball in the basket. They had great looks and chances under the rim but the ball just didn’t want to drop for them. As the final buzzer rang, the Thunder found themselves on the short end of another lopsided verdict, dropping the contest 64-39. “We missed 17 free throws tonight and some 'gimmes' under the rim," lamented Valpreda. "The Ooks didn’t out play us; we beat ourselves on Friday night with turnovers and tonight with free throws. When you play a team with that much experience they take advantage of those situations." Shyanne Walton was Saturday night's Player of the Game.
The Thunder are now looking ahead and preparing for their final two weeks of the regular season and definitely have no room for mistakes as they move forward. They will host a two-game home stand this coming weekend against the Keyano Huskies before finishing off the regular season against the Augustana Vikings. 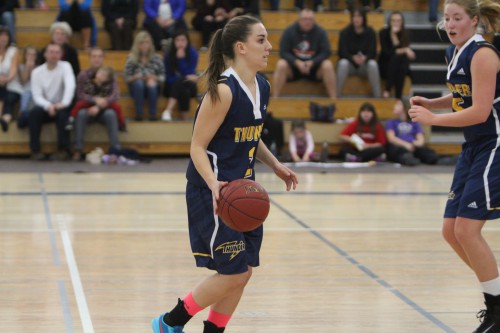