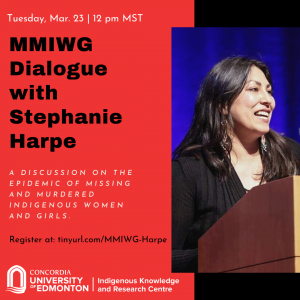 Join us on Tuesday, March 23 from 12 PM – 2 PM MST for a discussion on the missing and murdered Indigenous women and girls epidemic.

Each year, Concordia University of Edmonton hosts a number of events that center the experiences and voices of those impacted by Missing or Murdered Indigenous Women and Girls in Canada. This event will be presented by Stephanie Harpe, a MMIWG activist.

Stephanie Harpe is a proud member of the Fort Mckay First Nation. As a child, she spent her summers in Fort McMurray with her aunt Chief Dorothy MacDonald who was an activist and leader that challenged governments to protect the traditional territory of her people. She is a domestic abuse survivor, and a former addict who never gave up on her dreams of singing, even when times were difficult.

After the murder of her mother and friends in Edmonton, she has been advocating for murdered and missing Indigenous women through speech and song including the popular song “Somebody’s Daughter.” She was on the cover of Metro newspaper and presented at REDX TALKS, Edmonton. She spoke at Spirit of our Sisters Gathering, alongside Dr. Gabor Mate, Rinelle Harper, Tantoo Cardinal, and Wab Kinew. Her mission is to share her story and her opportunities with Indigenous peoples through her business, music, and public speaking engagements.