The Concordia Thunder Men's Volleyball team faced off against the 4th place SAIT Trojans this past weekend in a home and home series. As has been the case for much of this year, the Thunder put on a great show, pushing their opponent(s) hard, but come up short in the end.  On Friday night at home, the Thunder were within one tick of going to extra points in the first set, but were unable to seal the deal and went on to yield the final two highly competitive games for a 3-0 SAIT sweep (25-23, 25-20, 25-20). Having first semester kill leader and overall offensive threat Connor Reeves still out of the lineup hurt the Thunder at the net. "On Friday we competed for about 75% of the match, but a few mental let downs hurt us," lamented Head Coach Joel Mrak. "Leading 23-20 in the 1st set and giving up a 5 point run to lose it and blowing a 6 point lead halfway through 3rd set was tough and disheartening for the team. Instead of being up 2-1 heading into a 4th set, we found ourselves on the end of the 3-0 loss." Second year Left Side Josh Gaudet led the way with 9 kills and 3 digs.  ACAC 'digs' leader Matt Fulton added another 14 to his stats while Nick Dove and Adam Baker both had strong outings recording 8 kills, 5 digs and 8 kills, 4 digs, respectively.  Josh Gaudet was named Player of the Game.
On Saturday, the Thunder came out determined to reverse their fortunes from the night before and pushed the Trojans to the brink before faltering to a 31-29 first set decision.  The starch went out of the Thunder's stride after that as they fell 25-12 in each of the final two sets. Nick Dove kept up his consistent production with 6 kills and 4 digs while first year Adam Baker closely shadowed those results with a 5 kill, 3 dig performance.  Captain Alex Ingstrup was the Player of the Game. "Saturday started off great in SAIT's gym losing a tight one 31-29, but then SAIT went to work and served us off the floor," concluded Mrak.
It is worth noting that there was a 'silver lining' in the weekend's losses with the game day commentators from SAIT making the following observations during the online feed: "I don't know how Concordia isn't higher up in the standings. SAIT has so many more wins and they do not stand close in the standings, but this is a very talented Thunder team."
The Thunder Men's Volleyball squad will need to take those comments to heart as they go into the 2nd last week of the regular season where they will face the NAIT Ooks.  The action kicks off at NAIT on Friday night with the home game of the series going on Saturday night at the Ralph King. 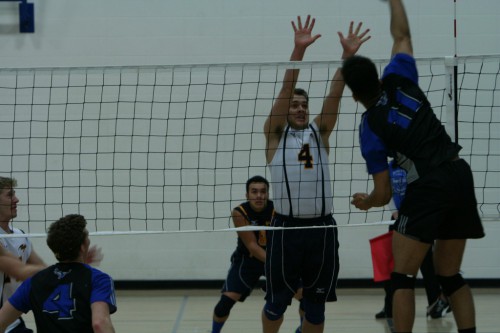