On Friday night in Lloydminster, the Thunder Men's Volleyball team came within three points of recording their first match victory of the season. Down two sets to start, the Thunder made a thrilling comeback – including an extra point fourth set – to push the home town Lakeland Rustlers right to the finish line. Despite a sluggish start for both teams, the Thunder owned the 3rd and 4th sets and the 5th was a constant back-and-forth battle. The bench came up huge for the Thunder with guys stepping in to serve and play defense when needed. The first contact was important for the team and when they passed well, they dictated the course of the match, with set scores 25-14, 25-20, 19-25, 25-27 and 15-12. In his first year with the Thunder, Left Side Keenan Forstey led the Thunder with 16 kills and was named the Player of the Game.
On Saturday back at home, the Thunder played a very evenly matched affair for the second straight night but fell to the Rustlers 3-1 (25-17, 26-24, 16-25 and 25-14). The Thunder had their chances in the 2nd set, pushing the Rustlers to extra points, but just couldn't put the men from Lakeland away. The team did a good job containing key Lakeland players, but in the end just ran out of gas. Veteran Connor Reeves was the Player of the Game with 9 kills,1 ace and 15 digs. Overall, it was a much improved performance for the team. Finding some consistency and being able to keep focused on the game plan from start to finish were both positives that the team can build on going forward. 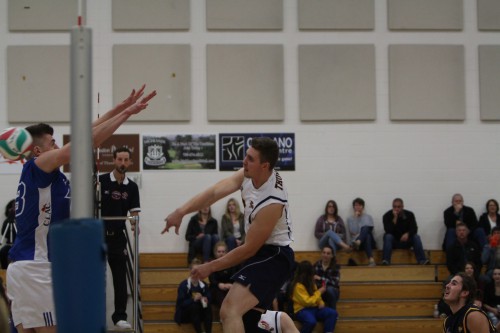