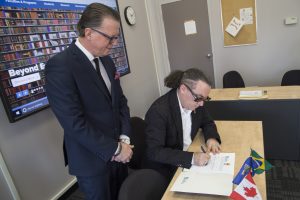 A significant MOU has been signed between Concordia University of Edmonton and UNEAL, the State University of Alagoas in Brazil, officially confirming a relationship that will see cooperation between the two universities on Indigenous matters.

UNEAL is the first university in the state of Alagoas, Brazil, to successfully graduate a full class of Indigenous students with an education degree, qualifying them as official teachers of the state. The university, and its president Professor Jairo José Campos da Costa, takes its mission of reconciliation with the Brazilian Indigenous peoples very seriously. The program is specifically tailored to them, including periodically locating classes as well as the university’s head office within Indigenous communities throughout the year. 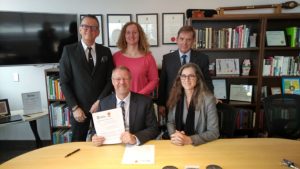 Dr. Manfred Zeuch, VP External Affairs and International Relations at Concordia, first met with the Brazilian university president in 2015 in Calgary. During their conversation, Dr. Zeuch understood UNEAL to be “a national leader, seeking to truly integrate indigenous peoples and provide an equity of opportunities and life quality for all Indigenous persons.” As Concordia University of Edmonton builds and acts on its own Indigenous strategy, developed under the guidance of a council of Elders, this relationship will serve to education, enrich, and enlighten its progression.

“…I know one cannot change history, the directions already taken,” President Campos said in his speechat the first Indigenous Convocation ceremony at UNEAL, “…but it is never late to reorient the steps to come and to write a new story….”

President Jairo José Campos da Costa is a guest speaker on the topic of Indigenous Education at the National Model UN Conference in Banff, this week, proudly hosted by Concordia University of Edmonton. 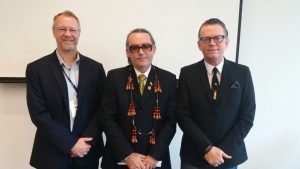