Grading at CUE during COVID-19 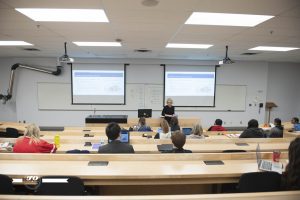 Last week I highlighted the fact that CUE will not be moving to a pass/fail system of grading, but will instead be following our normal system during the COVID-19 public health crisis. This system is outlined in Section 9.3 of our Academic Calendar. The response to this has been overwhelmingly positive from students, faculty, and instructors. However, as expected, there are a very small number of people who wish things were different. The opinions of those people matter, but they will not change what we are doing in terms of grading for Winter 2020. What might be helpful is a more fulsome explanation of the logic behind CUE remaining with our normal system of grading.

People who question the decision to stay with our normal grading system at CUE during COVID-19 point to the decision made at the University of Alberta to move to a pass/fail type model. The UofA, however, operates under an entirely different set of circumstances, including but not limited to class sizes that are often considerably larger than class sizes at CUE, particularly in many undergraduate programs. They have made a decision that they believe is in the best interests of their community, but their context is not the same as the context at CUE. It is worth noting also that 24 out of 26 Alberta publicly funded post-secondary institutions are, like CUE, not shifting to a pass/fail model during COVID-19.

Staying with our normal system of grading at CUE during the COVID-019 public health crisis takes into account the following factors:

Fairness to students. In a pass/fail system an alpha grade of ‘F’ equals a ‘Fail’, or ‘No Credit’. Very few would question the fairness of that. However, a ‘Pass’ or ‘Credit Received’ includes students who achieved alpha grades of D all the way through to A+ and does not distinguish between them. The student who was heading for a D gets the same grade as the student who was heading for an A+. The inherent unfairness is obvious.  This issue has been at the heart of student complaints where the decision to move to pass/fail in mid-semester has been made elsewhere. Notably, the inverse issue of support for moving to the pass/fail model has been negligible.

Instructor capacity. As I have said previously, at CUE our faculty and sessional instructors have put a lot of effort in to preserving the learning experience during our move to off-campus classes, and they are similarly able to assess student performance in such as way as to arrive at fair and reasonable grades using our current grading system. Our classes at CUE are typically small, and instructors have the capacity and skills to be able to adapt their final assessment to this new off-campus reality, especially as in many classes a good deal of on-campus assessment had already taken place throughout the semester before COVID-19 impacted our operations. Some students may not be happy with some of the modifications to final assessment that individual instructors have out of necessity had to make, but overall our context allows for a fair and meaningful assessment of student performance, even during COVID-19.

Institutional integrity. When students register at CUE we are making a commitment to them, and that commitment includes recognizing learning appropriately. Our grading scale is calibrated in such a way as to allow discernment between students in terms of performance, and also to not penalize students in special circumstances who might, for example, need to withdraw from a course. Having made this commitment, unilaterally changing course evaluation to pass/fail is problematic. CUE will deliver on what we have promised, and what we have promised is fair and accurate recognition of student learning and effort via the grading scale that features in every CUE course syllabus.

The future aspirations of students. Maintaining the integrity of our grading practices is critical to the future aspirations of our students. The grade a student earns is forever on their transcript. Having an entire semester that suddenly shifts to grades of pass/fail will not be helpful to CUE students in terms of applying for future scholarships, renewing current scholarships, and entry to graduate or other programs in the future. Admissions Offices in universities take the grades on an academic transcript into account above all else. Additional letters from professors saying “Student X was very good and was on course to get an A before we moved to pass/fail” are unlikely to be helpful.

University governance. CUE has adopted the 4-point grading system that is common throughout Canada. This decision was made by CUE’s governance body known as General Faculties Council (GFC) that operates under the authority of our Board of Governors and features representatives from faculty, administration, sessional instructors, the faculty association, students, and staff. The President is Chair of GFC by virtue of office. The purpose of GFC is to govern the academic matters of the university, which includes grading. Any changes to the grading system must first be advanced to a GFC standing committee known as the Academic Standards Committee. This committee considers the matters brought to it, and makes decisions that pass through the Executive Committee of GFC and later to a meeting of the full GFC (which occur 4 times each year) for ratification, modification, tabling, or defeat. This is a lengthy process involving deadlines and other procedural practices. In addition, changes of the sort of magnitude that modifying our entire grading system involves, even temporarily, are unlikely to be made lightly and without considerable debate. GFC operates with a long-term view, and making snap decisions for changes that come with significant consequences in a time of crisis would be unusual. As President I cannot simply overrule our GFC-approved grading system and say that we are changing to pass/fail system, even if I want to (and I do not). Rather, in collaboration with my colleagues, I ensure that the proper procedures are followed and in doing so defend the integrity of GFC and its processes.

Student stress and mental health. One argument put forward for the adoption of a pass/fail system is that it reduces stress on students and therefore improves mental health. I do not see any evidence that this is the case. It could equally be argued that imposing a new system of grading mid-semester, amongst all the other necessary changes that are occurring, would be more stressful to a greater number of students. We simply do not know. What we do know is that the final exam period is always stressful for many students regardless of the circumstances. The COVID-19 public health crisis may or may not make this more so, but we have supports in place to help. Those who need to talk to a caring and understanding mental health professional can reach our Student Life and Learning team by calling 780-479-9241, or by email at studentlife@concordia.ab.ca.

A ‘new normal’. This COVID-19 public health crisis will impact our operations for an indeterminate amount of time. Our spring and summer courses will be delivered online, and it is certainly not impossible that our fall classes will also need to be delivered in this way. We will have to wait and see. What is evident is that for now off-campus education is the ‘new normal’ and that in the long-term, along with the short term, moving to a pass/fail system becomes increasingly problematic. At what point is the integrity of a degree undermined when many of the courses that comprise it are graded only in the most rudimentary of ways? In sticking with our normal grading system CUE will avoid having to answer that question.

Finally, I have seen some people online arguing for a choice between having a grade assigned and opting for a pass/fail. Some universities such as the University of Calgary and the University of Toronto have apparently gone this route. Once again, these decisions have been made by those institutions in light of their own context and what is best for their students. It would not work for CUE. Imagine the student who looks at his grade, sees a ‘D’, and then decides to opt for a ‘pass’ instead. That student can then game the system to an extent, claiming in future job interviews or other contexts that he was on track for any grade he likes. Inversely, what student would see an A+ and opt for a ‘pass’ instead? Aside from such choices being impractical in an administrative sense at CUE, If we are talking about maintaining the integrity of our institution, our degrees, and our individual courses, we must have one grading system that applies to everyone, and only one. That, as I have described above, is the 4-point system with alpha grades.

I hope that this has helped to clarify some of the thinking behind why CUE will be sticking with our normal grading system during COVID-19. Doing so is fair to our students, preserves our institutional integrity, and takes into account the reality of the situation we are faced with.