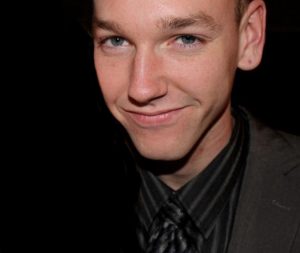 Congratulations to first-year Concordia music student Eric Scott, a.k.a. The Faceless Pianist, who has been nominated for two 2018 Edmonton Music Awards! Eric’s nominations are for Instrumental Recording of the Year for his piece “Before Time,” and for the People’s Choice award, which is based on public voting.

Eric is a self-taught musician and audio engineer who started composing at the age of 15, mainly on guitar. He released his first album, in the singer-songwriter genre, at the age of 16, and played guitar and bass on his own and in several bands for the next five years before taking a decade-long hiatus. Eventually he returned to music through audio engineering. More recently he has returned to his central passion of composition, striving to create music that is emotionally evocative and inspiring, and utilizing digital means to produce music that sounds as much as possible like an authentic live performance–hence the moniker The Faceless Pianist. He is currently releasing his second EP, which will complete his first full-length digitally-produced album.

Eric has come to Concordia as his interests have gravitated toward the piano, to develop keyboard, cello, and theory skills that will inform both his performances and more sophisticated compositions. To this point his recordings have been digitally produced using a software program and audio-engineered to develop the composition past his piano performing skill level, but he hopes to remedy that dilemma with the help of Concordia’s piano instructor, Dr. Ping-Shan Liao.

“I strongly believe in the importance of being mentored by the many music experts at Concordia . . . I feel truly privileged to receive the valuable advice offered by not only the professors but other students as well. Performing during the music seminars this semester is the first time in ten years that I have performed for anyone, and although I still have a lot of stage fright, being back to doing what I love and being able to share it with others feels amazing! I very much look forward to performing more and more as my skills improve and getting a chance to work alongside all the amazing talent the students of the music program possess.

“Ultimately, I just want to be able to write music that inspires others, ideally making a living scoring films and video games as well as continuing to write my own brand of music.”

Vote for Eric as “The Faceless Pianist” under the People’s Choice award here.