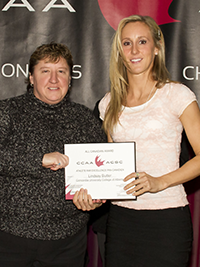 Each award recipient is selected by their individual conference based on their performance and contribution to both their sport and their team.

Concordia's All-Canadian was Lindsay Butler. Lindsay's Butler's incredible skill and fitness level led to 18 goals and 8 assists in just 10 games; she also scored a hat-trick in three consecutive games. Concordia finished first in their division and earned a wildcard to the 2012 CCAA Women's Soccer National Championship.

She scored two goals to lead the Thunder to a 3-1 win over the Humber Hawks in the first game of the 2012 CCAA Women’s Soccer National Championships, hosted by Holland College of Charlottetown, P.E.I.