The Thunder Women's soccer team opened the provincial weekend with a 2-0 victory over Lethbridge College on Friday afternoon.  The Thunder ladies held the majority of ball possession and created a number of opportunities in the attacking zone.  First year player Maggie Boras scored both goals for Concordia to earn herself the Player of the Game title.  Boras created both goals by rushing the net and capitalizing on loose balls.  “This is something (rushing the net) that we coaches have been preaching all season; they may not be the prettiest goals, but we’ll take them," stated Coach Franco Imbrogno. The victory did come at a cost as the already depleted roster experienced an injury to starting midfield player Karey Lubkey.  Lupkey injured her ankle in the first half and was forced out of the tournament.
The following day Concordia was up against the number one seed in the south, Medicine Hat College.  The winner of this match would advance to the final.  After 12 seconds into the match Concordia conceded a goal.  “That’s the fastest goal I’ve have ever seen to start a match,” said Imbrogno, “but I felt comfortable that we would respond positively.” …and that’s what transpired.  The CUCA ladies eventually settled in and evened the score about 10 minutes later with a 35 yard free kick goal by midfielder Kendra Benson.  Concordia maintained the majority of possession throughout the match and created most of the scoring chances including two cross bars but as is often the case in soccer, the better team doesn’t always win.  In the final minutes of the game Medicine Hat scored on a loose ball which put the game out of reach.  Even a last second free kick for Concordia within 25 yards of the net saw the ball soar over the bar and saw the chance of competing in the gold medal match fade away.  Regardless of the outcome the Thunder women played their most inspired game of the year.  “We have played great football the last two games…today’s match (Medicine Hat) was a coming out game for our girls,” said Imbrogno.  “They demonstrated those intangible qualities that championship teams must possess.  Without those qualities a team will never win.  This team has shown that it can compete.  Now it's about having some luck.”   The game came at another high cost as the Thunder lost their Conference All-star Midfield player Kaitlyn Diduck for the weekend to an ankle injury.
On the final day of competition, the Thunder played Grande Prairie Wolves for the ACAC Bronze Medal.  Starting the game with just two substitutes, Concordia quickly dropped to one as starting Midfielder Ahlem Abubaker left the field with an ankle injury.   Two tired and depleted squads squandered opportunities, and questionable officiating for either side made for a match script that seemed headed toward penalty kicks. However that was not to be, for in the last minutes of the match the Wolves scored the first and only goal of the game to relegate the Thunder to a fourth place finish for the Championship. “Our girls entered the elite level of play this weekend and played inspired the whole weekend.  We did what we had to do to win, unfortunately we needed a little more luck in putting the ball in the net and staying healthy.  Every one of our girls elevated their level of play and several girls emerged as incredible leaders by their work rate on the pitch.  We have sowed the seeds,” concluded Imbrogno. 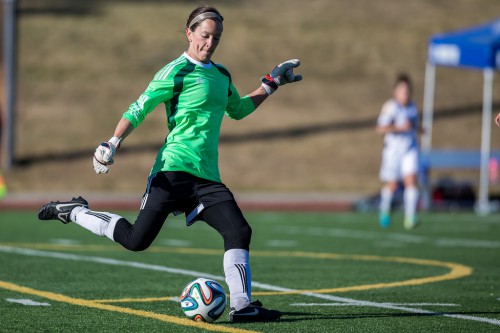