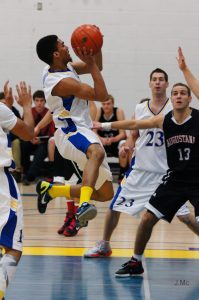 Friday night at home, the Thunder played their best ball of the season jumping out to a 34-14 first quarter lead. The Thunder slowed the pace in the second half and cruised to an 83-66 win.

“When you start like that, it makes your life pretty easy,” said Coach Wood.

Saturday was a much tighter and physical game in Camrose. A back and forth first half saw the Thunder go down by four at the break, but a 24-7 third frame put the Thunder up 13 going into the fourth where they fought to hang on to a tough 66-58 victory.

“Sometimes you have a night where an aggressive defensive philosophy can get you in some trouble,” said Coach Wood.

The Thunder wrap up the 2012/13 season with a home and home against the Lakeland Rustlers. Saturday night’s home game starts at 8 p.m. at the Ralph King Athletic Centre. It's Senior Night and the Thunder will honour their graduating players.