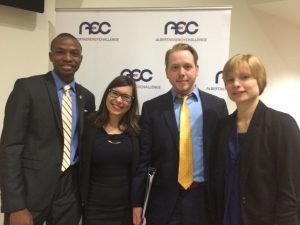 Organizers introduced the teams to the Energy Industry in Alberta with resourceful speakers and also took the teams on impressive tours.  The facility tours included going to Packers Plus in Edmonton and with the use of Cenovus’ private jet, a one-day trip to and from Edmonton to tour Cenovus’ Christina Lake Facility, just South of Fort McMurray.

The case study involved team’s using knowledge of the oil sands industry and Cenovus’ current asset structure, to advise Cenovus on the ideal structure of its innovation and alternate energy portfolio.  Based on the business and chemistry expertise of the team, the team suggested that “Solvents were the solution!”  The four CUE students worked well together as a team.  This was due in part to the students utilizing their knowledgeable coach’s skills and expertise in preparation meetings prior to the competition and provided valuable inspiration during the gruelling competition.  A compelling presentation was given by the Concordia students to two judges.  Without doubt, the students were well prepared to answer every question that was asked of them and handled themselves masterfully.

Judges evaluated teams in three rooms and one team from each room advanced.  Unfortunately, the CUE team did not advance, however, it was heard that the judges had a difficult time in deciding who would advance, the competition was close.  To think our students were competing head-to-head with master’s level students demonstrated the strength of our students working together and were successful participants in this intense case competition that did CUE proud! 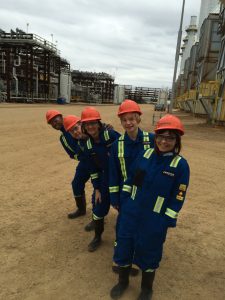