Women’s Basketball Get Two vs the Vikings 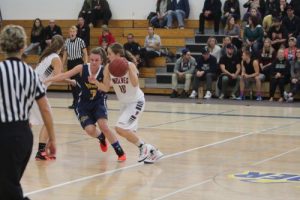 The 2016-17 ACAC regular season began this weekend for women’s basketball as they went up against the Vikings of Augustana. The Thunder are coming into the season with high expectations as they have a very seasoned roster with a lot of potential. “We have had an excellent pre-season. The girls have been working extremely hard challenging each other in practices and for the rookies, it’s (about) getting used to the game at a higher level,“ stated Head Coach Robbie Valpreda. As the Thursday night game started, you could see that the Thunder had some nerves and excitement as the players worked to shake off some of the cobwebs.  Even though the Thunder have a number of returning players it always takes time to adjust and learn how to play with each other.  After the first two quarters the Vikings were the aggressors with a 29-25 halftime lead. The Thunder struggled at first, missing a lot of easy looks and not capitalizing on easy buckets.  As the second half began the Thunder pulled it together, led by Captains Nakita Newman, Shyanne Walton and Ann Stewart.  “They stuck together and led our team through some rough patches; they set the tempo and everyone else contributed.” In the end the Thunder pulled out a 69-64 OT victory.  The Thunder team looked great to start off the season with Nakita Newman leading all scorers with 20pts. But, the difference makers on the defensive end were Ann Stewart with 14rebs and Sofia Lucadello with 10 rebs. Player of the Game was Nakita Newman.

On Saturday evening the Thunder travelled to Augustana to compete in the always-difficult gym of the Vikings. “It’s a tough place to play. They have great fan support and it brings the energy and hustle to the home team.” The Thunder knew that they had to be able to weather the storm and play as one team. The Vikings again were the aggressor and jumped out to as much as a 13-8 lead.  But the Thunder were able to answer back and finish the first quarter down just 18-16. In the second quarter, the Thunder pounced all over the Augustana defense, attacking them off the dribble, making the extra pass and getting up the floor in transition. “We’re playing really well right now; everyone on the team is contributing in one way or another and we need that in an environment like this,” said Coach Valpreda. Going into halftime it was the Thunder with a 37-33 advantage. For the last 20 minutes of the game it was Concordia who ‘brought the Thunder’. They applied great defense and took advantage of Augustana’s 26 turnovers. A big stand out in the game was newcomer Lacey Weddle as she had 14pts and made some big shots at crucial moments. “Lacey played well. She is still adjusting to the game and coaching style but she has the potential to be a good player in this league.” Sofia Lucadello also had an excellent bounce back game with 10pts and 4rebs. Concordia sealed the game with a 77-64 win. “This was a great weekend for our team. It proved to the girls that they can win and for everyone (else), how hard these athletes work. It’s such a long season and we have a long way to go but it gives us confidence and momentum going into next week’s games.” Player of the Game went once again to Nakita Newman.

The Thunder will have their mettle tested this coming week when they take on perennial powerhouse NAIT.  The home affair goes Friday night at 6 PM.