The Thunder Women’s Basketball team finished off their ‘season of ascent’ in Lethbridge this past weekend, playing in the ACAC Women’s Basketball Championship. Concordia’s presence in Lethbridge marked the first time the Thunder have been back to playoffs since the 2012-13 season.  The 2nd seed in the ACAC North, the Thunder’s first match up was against the South’s 3rd seeded SAIT Trojans. SAIT’s playoff experience was evident from the first tip-off and Concordia’s ‘playoff nerves’ were equally evident.  Going into halftime the Trojans were up 26-18. “We had to get all the emotions and nervousness out for us,” stated Head Coach Robbie Valpreda. In the second half, the Thunder started to get into their game day rhythm and cut the Trojans lead to as little as 4 pts. Nakita Newman led the push with a barrage of baskets but unfortunately, turnovers hurt the Thunder and they lost the opening match up 64-48. “We played out of our comfort zone tonight and played right into the hands of SAIT. We gave up 37 turnovers, the highest all year and the Trojans capitalized on 27pts off our turnovers.”  Ann Stewart was named as the Player of the Game.
In the consolation semi-final, the Thunder faced the Lakeland Rustlers for the 5th time this season. “We had to go back to playing with some fun. We couldn’t let one game overshadow this team’s otherwise successful season,” avowed Valpreda.  In the first half, the Thunder looked like themselves again going into halftime up 37-26.  In the 2nd half, Lacey Weddle started out hitting a 3-pointer and then getting to the basket off of penetration. Ann Stewart was a big presence in the paint, finishing the game with 13pts and 8 rebs as the Thunder took the win 69-49.  The victory put the Thunder up against NAIT Ooks in the 5th/6th game on Saturday afternoon. The Player of the Game was Ann Stewart once again.
In the final game of the playoffs, the Thunder were determined to go out with a bang.  “We wanted to finish our season on a high note and finish our last game with our heads held high,” stated Valpreda.  It took some time for the Thunder to settle in, falling behind 11-2 in the early going. It was a physical game on both ends of the floor for these old rivals as each team wanted to finish their seasons off with a win. “It’s like a boxing match out there; we were going punch-for-punch with each other. I kind of liked it,” exclaimed Coach Valpreda. Coming out of halftime down by four, the Thunder started to roll in the third quarter going up 42-38. Late in the 4th quarter, the Thunder took the lead again 59-58 with 2 mins left.  “We did an excellent job of defending NAIT’s top players. We forced them to take some low percentage shots, we rebounded well against their strength but we didn’t do well against their pressure. It forced us to make some bad decisions which a veteran team like the Ooks took full advantage of.”  The final score was 70-61 in favour of NAIT. Player of the Game was Nakita Newman.
In the end the Thunder had a great season, going 19-8 (playoffs included) and making the trip back to the playoffs, finishing 6th overall. “We always said we have to work hard to get to the playoffs and we got here. Now we will have to work even harder to be a champion,” concluded Valpreda.  The Women’s Basketball team would like to thank all their supporters and wish all the best to their departing players. 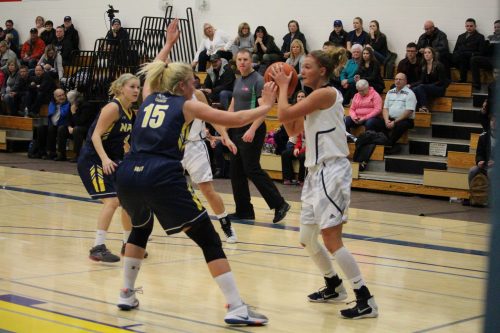