This past weekend the Thunder Women’s Basketball Team took a trip south of the border to Havre, Montana to compete in the Duck Inn Classic at Montana State University-Northern. The team played the best NAIA Division 1 teams in the state of Montana. On Wednesday night, the Thunder opened up against the hometown 'Lights' from MSUN. “This is a great experience for us to compete against different opponents. These teams are stronger, faster and much more experienced than what we will see in our conference,” said Coach Valpreda.  Right from the tip off, the MSUN Lights found themselves quickly out to a 12-2 advantage after one quarter. “We are here to get better, to compete against highly skilled teams. If we can defend and score and play with these guys it will help us at home with our competition. Overall, the game was a great experience, as was the atmosphere; MSUN had a full house, there was the smell of popcorn in the air, fans cheering…it was the start of basketball season."  The Thunder eventually fell 71-31 to the Lights. “They shot 60% from the 3pt line and only 52% from the free throw line. They can shoot and when they did, they hardly ever missed. Our girls played hard and competed well. We also had fun with this experience and were looking forward to the next two games."
On Thursday night, the Thunder took to the floor vs. Rocky Mountain College from Billings, Montana. “This team is ranked #4 in their conference. They have two guards that can really shoot the ball, they come off the screens well and it's quick,” said Coach Valpreda. The Thunder battled hard throughout the game, with great, consistent effort from Shyanne Walton, Nakita Newman and Geri Anstice. "Those three led the team tonight, battling hard every possession," stated Coach Valpreda. ”We're still trying to figure things out. It's only game 4 of preseason. We have a lot of games ahead of us but I thought these 3 really stuck out tonight."  Although the Thunder were better on the offensive side of the ball on Thursday, they gave up more points on the defensive end, losing 88-48.
Friday afternoon was the final game of the tournament and of the 2015-16 preseason for the Thunder. “It's been a great 3 days here in Montana; we have been playing good basketball but not only that, we have been able to bond as a team and spent time together." The final game had the Thunder playing the Argonauts from the University of Great Falls. The Argos are ranked #2 in Montana with a lot of fire power. “They have an unbelievable point guard, a 6’5" post and a versatile and strong small forward. We had a tall task ahead of us but we're always up for the challenge and never backed down. The Argos got off to a quick start, but the Thunder battled back, moving the ball well on offense and holding their ground on defense. The Thunder went into halftime down 41-21. "For us, that a huge improvement. We stuck with them. Obviously they have a lot of fire power but we rattled them at times and everyone contributed. The spark for us was Malia Hamel who took a bunch of charges and gave us some momentum on the defensive end." As the final two quarters came to an end, the Thunder found themselves on the losing end of a 76-46 decision. In the final quarter, the Thunder outscored the Argos and were led by top scorer Sofia Lucadello (12pts).
The Thunder open the ACAC regular season October 17th and 18th hosting a home double-header vs Grand Prairie. Game times are 6pm and 1pm, respectively. 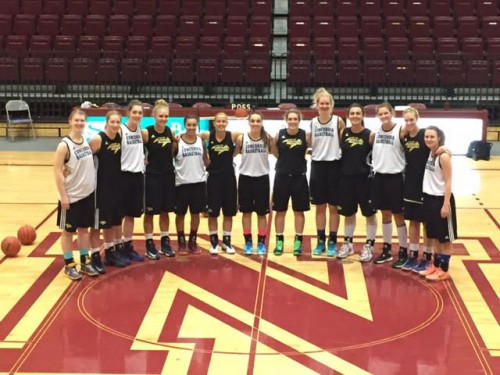