Going into Week 2, the Thunder Women’s Basketball team were looking to build on their 2-0 start to the season. However, this would be a daunting task against the defending ACAC Champion NAIT Ooks. NAIT has a very seasoned, experienced team and chronologically, the oldest team in the North Division. Right from the tip off, the Ooks looked to set the tone as they jumped out to an early 15-4 lead. “We have to be a bit more patient vs. the press attack. This is a team that we are facing that scores off our turnovers. We can defend them in the half court, but points-off-turnovers is how they dominate the league," opined Coach Valpreda. Veteran Forward Jordan Lembryk drew a tough task, defending NAIT's Torey Hill. “Jordan was phenomenal. She defended Torey very well, holding her to 7pts.” At the half, the Thunder found themselves down 33-17, with NAIT taking 11 of their points off of turnovers. In the final quarter, the Thunder finally found their rhythm, outscoring the Ooks 24-17 and cutting the deficit to 12 pts. Shooting Guard Morgan Dool led the Thunder with 19pts but in end,  the Ooks won 57-44. “We played well in the end; a little too late but we created some momentum for us going into tomorrow night's game. We know we can compete and beat this team. We just have to play for a full four quarters to give us a chance,“ stated Coach Valpreda. The Player of the Game was Morgan Dool.
Saturday evening, the Thunder headed over to NAIT to take on the Ooks in their gym. Coming off a disappointing start to Friday’s game, the Thunder wanted to be better right from the tip-off. “It didn't require a major change in strategy. We just had to make some small adjustments and play with a bit more patience and poise,” said Coach Valpreda. Right from the tip off the Thunder jumped all over the Ooks, playing with more confidence and a lot more discipline than they had the previous evening. After one quarter the Thunder were up 17-12. The Thunder continued to dismantle the Ooks' defense and went into halftime with a 38-23 lead.  “We know NAIT is a strong team; we know they will not just back down. Their veterans will look to change the momentum and we have to weather the storm: How we play to their game will determine the outcome of this game.” IN the 3rd quarter, the defending ACAC Champions jumped all over the Thunder, squeezing the vise just a bit. But the Thunder continued to defend very well and played with great defensive intensity. However, it seemed as if 'lady luck' was on the Ook's side, as the Thunder just could not find the bottom of the basket in the 3rd quarter. “It was as if the hoop had a lid on it.”  The Ooks took full advantage of that, outscoring the Thunder 21-3 in the 3rd. As the 4th quarter began the Thunder were only down 46-41 and still in the ball game. But against a veteran team all the momentum shifted to the Ooks as they pulled away with a 66-48 win. “I’m confident in this team and this is a learned lesson for us. We can compete with them and even beat them. It showed in the first 20 mins; we made some mistakes but the girls continued to play hard. This game does some crazy things at times and for us it was the fact we couldn’t put the ball in the basket in the 3rd.quarter. We learn and keep trucking,” concluded Valpreda. Congratulation to Ann Stewart who was named as the Player of the Game.
Next up, the Thunder make the long trek up north to take on the Keyano Huskies in a pair of away games. 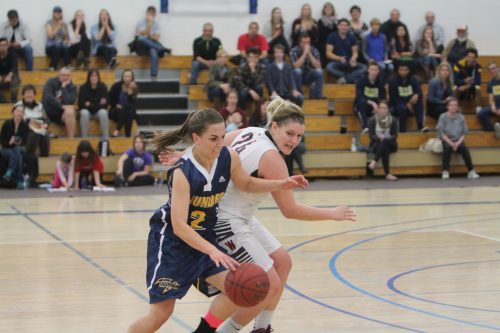