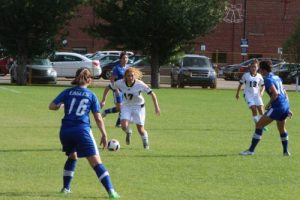 The Concordia Women’s Soccer team finished its regular season with a 3-1 victory over Keyano on Saturday and a 3-2 victory over Augustana on Sunday.  With Halloween one week away, Concordia served its best impersonation with its style of play of the novel characters of Dr. Jekyll and Mr. Hyde.  In Saturday’s match, Concordia played uninspired football against Keyano in the first 45 minutes but played a great second half to win the game.  In the Sunday match versus Augustana, Concordia looked defeated and fell 2-0 at half but came back and played like composed intelligent veterans and scored three unanswered goals in the second to win 3-2.  It’s a concerning trait they have shown several times this season, showing two sides to their play.  “Unfortunately, teams go through moments where their connectivity is off,” stated Coach Imbrogno.  “As a group we need to solve it on the field sooner; we can’t wait a half to turn our game around. We won’t have that luxury next week at the championships.”  Goal scorers for Saturday’s match were Jaida Stasiuk, Shyanne Walton and ‘Player of the Game’ Brynn deVries. Tallying on Sunday’s match were Gabby Bayne, Eleni Stamatakis and Karey Lubkey.  Bryanna Neihaus won ‘Player of the Game’ honours.

Thunder Women’s Soccer will be vying for a second straight national berth this weekend at the ACAC Soccer Championship.  Their opening game is Friday, October 28th at 2:00 PM.  All games will be held at the Clareview Leisure Centre turf field.