The Concordia Thunder Women's Basketball team and Head Coach Robbie Valpreda are proud to announce the recruit class for the 2015-16 edition of the Thunder.

Sofia Luccadello – Coming from Edmonton's St. Francis Xavier Rams program, Sofia will be joining the Thunder for the 2015-16 season. Sofia is an aggressive wing player that has a pretty good scoring touch. “Sofia has a great basketball IQ. She’s a Basketball Alberta kid and a Edmonton Metro All-Star. She has a solid foundation in the game and will be a big contributor to our program,” states Coach Valpreda. The Thunder program is thrilled to have such an accomplished athlete be a part of Concordia and our future success. Nakita Newman – Originally from Sherwood Park, Alberta, Nakita played for the University of Prince Edward Island from 2010-13. She has the experience of playing at the CIS level and the Thunder are looking forward to having her experience and scoring ability to help on the perimeter. “We are very fortunate to have a player such as Nakita to come to our program. She was a leader and scorer for the Panthers during her time at UPEI. She can defend on the perimeter and in the post if need be,” says Coach Valpreda. Concordia is a great fit for Nakita as Concordia is not a huge place to get lost in; it has similarities to her time at the University of Prince Edward Island. Nakita is no stranger to basketball in Alberta. In 2009, she played on the U17 Women’s team for Basketball Alberta. 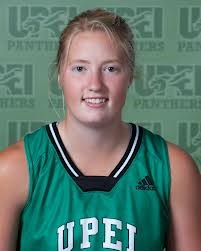 Malia Hamel – Malia hails from Edmonton and comes to the Thunder out of Archbishop Romero High School. Last season, Malia started her post-secondary playing career with Central Maine Community College.  With the Mustangs she averaged 5.1 PPG and shot 42% from the 3 pt line. “Malia will be of great benefit to our offense. We see a lot of zone in our league and having Malia on the wing will allow us to be better against the zone sets.  Not only can Malia shoot the ball but having another ball handler out on the floor will also help the Thunder. Malia comes from a great basketball family. They have a lot of love for – and knowledge of – the game.” Welcome to the Thunder family, Malia!

Thunder Women’s Basketball are pleased to announce the commitment of Ann Stewart to the program. Ann played last season for the RDC Queens. “Ann comes into our program with ACAC experience. She comes from a good program at RDC and was a big contributor to their success. With the loss of our experienced post player, Ann will fill that void nicely. Ann is tall (6’0) and athletic; she’s quick and that’s the type of player we're looking for,” says Coach Valpreda. Originally from Vernon BC, Ann will be enrolled in the Bachelor of Science program.

Other notable athletes that will be joining the Women’s Basketball program will be:

Natalie Russell – 5’11 Chestermere, Alberta – Natalie had a great season and high school career with the Lady Lakers from Chestermere. Her toughness and hard work mentality will be a positive for the Thunder. "Her contributions will not go unnoticed and we are thrilled to have Natalie in our program."

Jaycee Conroy – 6’0 Harry Ainlay, Edmonton – Jaycee comes to Concordia after taking a year off from basketball. Originally from Edmonton, she played her high school basketball at Harry Ainlay. "Jaycee is and will be a versatile post player. Jaycee comes from an environment of winning at Ainlay and will have a bright future for the Thunder."

Michaela Barwell – 5’6 Wetaskiwin Composite High School – Michaela is a very strong and athletic guard. She is a great distributor and defender. “Michaela comes from a successful program in Wetaskiwin. She’s a leader and a real 'diamond in the rough'. She has the potential to be a great ACAC player. She’s hard working and has great determination."