For the first time in the history of the Thunder Men's Volleyball program, the team swept both games of a weekend series AND won a match in straight sets.  On Friday in Olds, the Thunder got out to a good start taking the first set 25-20 before faltering in an extra-point nail-biter second set (29-30) and again in the 3rd set (19-25).  However, the Thunder dug deep and in a thrilling comeback, took the 4th set in extra points 28-26 before sealing the deal with a 16-14 finale. Connor Reeves had his biggest night of the season with 25 kills, 2 blocks and 2 digs. Adam Baker also showed his skills with an 8 kill, 2 ace and 3 dig performance.  Captain Alex Ingstrup showed his consistency recording 10 digs, 1 block and an ace.  Connor Reeves was the Player of the Game.
Back at home on Saturday night, the Thunder kept the momentum going and took the Broncos in straight sets 25-16, 25-23 and 25-22.  First year Nick Dove had another strong outing in his young ACAC career recording 15 kills, 6 digs and a block while Connor Reeves also had his second outstanding night in a row tallying 14 more kills and an ace.  Libero Matt Fulton added 17 more digs to his conference leading total. Nick Dove was named Player of the Game.
A very proud Coach Mrak commented on the milestone setting weekend for the program. "It was nice to get our first league win of the season out of the way on Friday in a tough environment. Our team showed tremendous resilience to finish off that match in Olds; it was really a gutsy win. Saturday night was a much different game and our team executed the game plan perfectly. We stayed calm and under control and didn't give up the lead even when there was a little pressure. Connor had an outstanding weekend with 39 kills, 2 blocks and 1 ace for a total of 42 points in 2 matches. I can't say enough about how well he has played this season and he just keeps working on getting better. It was also nice to see other guys step up and make contributions."
The Thunder will now finish off first semester play with a home-and-home series against the CIS-bound MacEwan Griffins.  Ahead of a Noon hour pep rally in Tegler on Friday, the Thunder are hoping for a big crowd to finish off the first half of the season with a bang.  Go Thunder! 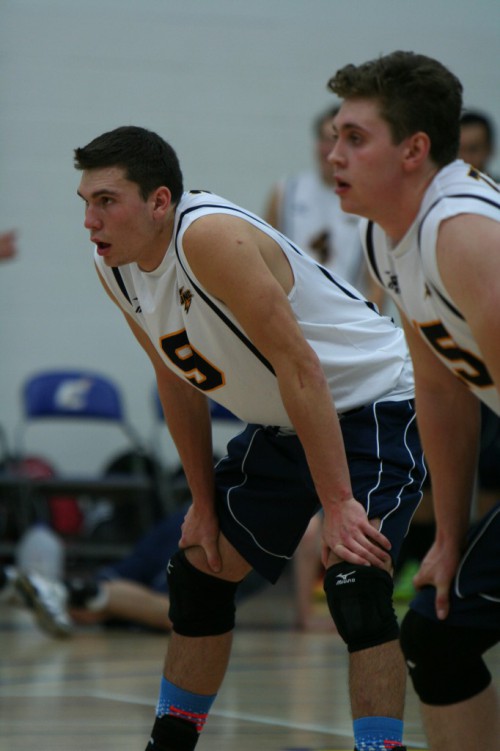