The Thunder Men's Volleyball team were just two or three points shy of victory in 4 of their 6 games this weekend but just weren't able to 'seal the deal' against the King's Eagles.  On Friday evening at home, the Thunder lost in straight sets 25-21, 25-23 and 25-15 with second year player Connor Reeves recording a whopping 16 kills along with 7 digs. Libero Matt Fulton also recorded 12 digs in the contest.  The score was even closer on Saturday night at King's with the Thunder being inched out of all three sets 25-23, 25-22 and 25-22.  Once again, Connor Reeves had a great match with 12 kills to his credit. "Connor was Player of the Game both nights and was by far our most consistent player on offense," said Coach Joel Mrak. "We are struggling for consistency and discipline across the board but do show glimmers of the potential for this team. We have a great group of guys that work hard and are improving, although (we) need to be tougher mentally. They will be fun to watch if we can get to that next level and start tapping into the potential of the team," concluded Mrak.
The Thunder will now face another tough opponent when they travel south on Friday to take on the upstart Olds College Broncos before returning home on Saturday night for the return engagement.  The match is set to go at 8 PM at the Ralph King Athletic Centre. 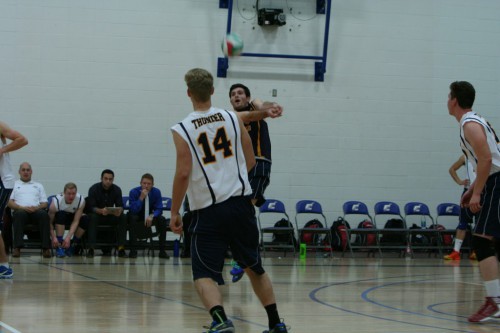