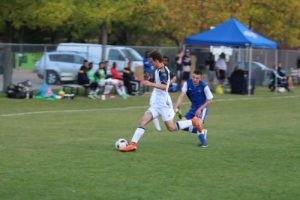 Away to Kings + cold rainy day = slick watery pitch + seat at provincials on the table = character test. The Thunder Men’s Soccer team passed said test in style. Although the 1-0 result seems narrow at first glance, Men’s Soccer stuck to the script and its principles, attacking the host with possession and probed throughout. After a rocky first 2 minutes, the boys settled down and dominated the ball. The only downside of the first half was allowing a couple of Kings counterattacks to threaten and not having broken through with a goal. The second frame was better as the boys took complete control but just struggled to find a way through. To their credit, Kings have a decent defensive record and they showcased this to stay in the match. Ultimately the boys found a way and came from the unlikeliest of  sources when Santi Vergara, having come on for Kenny Johnson through injury, found himself just inside the box with the ball sitting nicely for him to first time it through traffic low into the far corner. “Not a bad way get his first minutes of the 2016 season,” commented Coach Ian Skitch. “Israel Olufuwa was immense and was deservedly named Man of the Match, however, The Team must ultimately take the credit for passing this test in such a manner. Well done boys.”

The Thunder will now have the Thanksgiving weekend off and will then prepare for a showdown with the NAIT Ooks on October 15th at NAIT.