A big ACAC North Division series took place this past weekend for the Thunder Men’s basketball squad against the Lakeland Rustlers. Friday out in Lloydminster, the Rustlers would jump out early on the Thunder but the visitors would battle back to tie it at 21 after the first frame.  Another slow quarter from the Thunder put them down 38-32 at the half.  Bouncing back early in the 3rd, the Thunder would come all the way back and then some, taking a 4 point lead into the 4th quarter where they would go up by as many as 10. The Thunder withstood a late run by the Rustlers highlighted by big steals from Nathaniel Wojcicki and Jason Jones Jr. to seal the 73-67 Thunder win. Leading the way for the Thunder was Artez Scharer with 24 points, 7 rebounds and 3 steals and Ryan Coleman with 22 points and 8 rebounds, with Rob Haack adding 9 in the victory. “Any season we can go out to Lloyd and win both games is big,” remarked Coach Wood. “Lakeland has a talented team and I’m pleased we could get the win to clinch the season series.  Winning the series can – and in this case most likely will – have big playoff implications so this was big for us.  Several guys made important plays at key moments which was great to see.”
Saturday back at the RKAC the Thunder looked to complete the sweep of the Rustlers and heading into the 4th quarter with an 18 point lead everything seemed to be in place. The Rustlers however had different plans, tearing off a 30-6 run and defeating the Thunder 77-71. “Last time I checked, basketball is a 40 minute game. I guess we thought it was 30,” said Coach Wood after the shocking loss. “When something like this happens you always have to credit your opponent for what they did and the Rustlers made a number of big plays to get this win.  I will say though that we made a litany of grievous errors that we just shouldn’t make.  We will have to work extremely hard in practice this coming week so that we can avoid a repeat of those mistakes.” Artez Scharer again led the Thunder with 23 points, 4 rebounds, 3 assists and a season high 8 steals.  Ryan Coleman registered his 11th double-double of the season with 19 points and 12 rebounds.  Nathaniel Wojcicki added 16 points, 3 rebounds, 2 assists and 3 steals.
The Thunder have 2 games this coming week against the Augustana Vikings.  Friday’s contest is at the RKAC with the rematch going Saturday out in Camrose.  Both tipoff at 8pm. 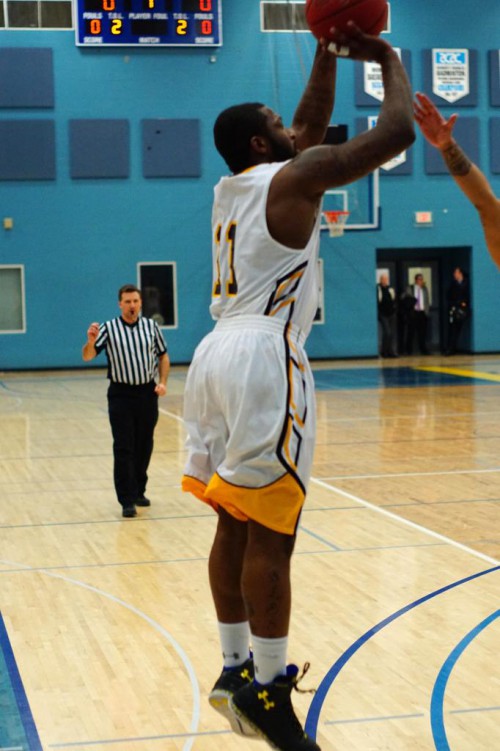