The 2014 Nike Indoor Challenge was held at the Edmonton Garrison track on Saturday and both of the Thunder Indoor Teams put forth their best showings so far this season.
The women finished in 3rd place overall behind Lethbridge and MacEwan and one point ahead of SAIT and Grande Prairie.  Ladies Captain Marriya Jenkins got things rolling for the Thunder with a solid win in the 1500, outkicking her MacEwan rival Vanessa Trofimenkoff in the final steps of the race to run her 2nd fastest 1500m of all time.  Patricia Jackson and Tania Eljurdi both scored points in the 400m with Barbara Jackson finishing just behind them.  All 3 of those ladies set new personal bests in those events.  In the 3k, rookie Shelby Edgar became the 3rd fastest ever Thunder runner, running a new PB and finishing in 6th place on the day.  Jenkins and the Jackson sisters all doubled back in the ladies 800m with Marriya finishing in 4th in her 3rd fastest 800m of all time and both Barbara and Patricia running their fastest times of the seasons.  With 5 ladies at the race, the Thunder were able to field a 4x400m relay team for the first time in 2 years and they finished 5th place overall to pick up a few more points for the team.  "It was great to have a full team out today," said Head Coach Matt Norminton. "To finish 3rd and beat out both Grande Prairie and SAIT is exciting.  We have more to come as well, I know it."
On the men's side, the speed demons Ben Thomas, Chris Gaertner and Cody Krantz got things going for the Thunder men in the 400m.  Thomas ended up on top, setting his 2nd school record in as many weekends and finishing 2nd overall.  Gaertner held on for 3rd place overall in a season best and his 3rd fastest 400m in a Thunder singlet.  Cody Krantz ended up with another personal best and moved his way up the Thunder rankings to 7th fastest man of all time in the 400m to date.  In the 3k, Kevin Chambers ran a solid season best to finish 4th overall and pick up a few more points for the Thunder men.  In the 800m, Ben Thomas ran another personal best to finish 2nd overall and move up to the #2 Thunder man of all-time in the rankings.  "I'm super happy for Ben. All of his hard work is really paying off.  It just goes to show how much you can improve when you show up and put in the miles," said Norminton.  Gaertner was next across the line in 10th with Krantz just behind him in 11th and a new personal best, moving himself up to #7 all time Thunder runner.  In the 4x400m, the men continued their dominance despite missing team Captain Joel Perren and got their revenge on Lethbridge with a big win.  "Chris ran a very good lead off leg for us and Ben just increased that lead.  Cody filled in superbly and Kevin did what he needed to get us the win," said Norminton.
The Thunder Indoor Track teams will now have a weekend off before going to compete at the Alberta Indoor Championships at the U of A the first weekend in March. 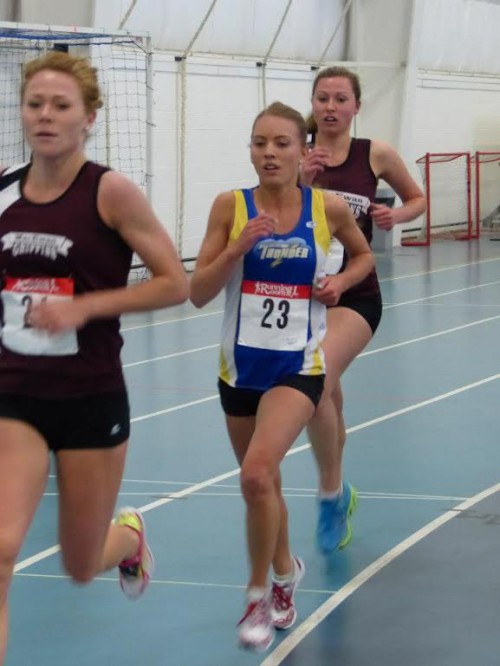