This past weekend the Thunder faced off in a two game home stand against the Keyano Huskies. On Friday night, the Huskies jumped out to a quick 2 to 0 lead and despite a goal by Jordan Hoffman and a strong offensive push in the third period, the Thunder could not solve the Keyano goalie and dropped the game 3 to 1.
On Saturday afternoon, the Thunder battled hard and gained a 4 to 2 lead late into the third period. However the Huskies were able to tie the game with the net empty in the last minute and forced the game into OT. Goaltender Connor Dobberthien stood tall and Thunder and Huskies remained deadlocked for the 4 – 4 tie. First year forward Adam Moghrabi led the way offensively with 2 goals and is quickly establishing himself as a leading player for the Thunder.
This coming weekend, the Thunder will close out the 1st semester with 2 games against the Red Deer Kings.  The home game goes Friday night.  Just a reminder to Thunder fans that due to a scheduling conflict, the game will not be played at Clareview Arena but rather at Bill Hunter Arena (9200 – 163rd st.). 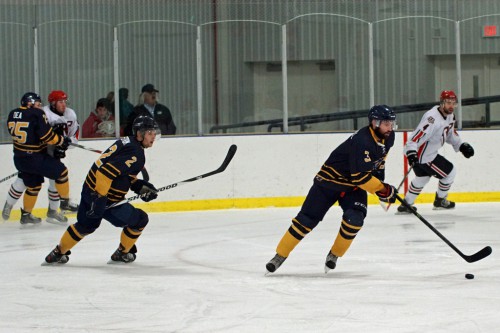