Following a season in which they graduated 7 players, the Concordia Thunder Men’s Hockey team has many holes to fill on their roster. Coach Dan Glegloff and his staff have spent a majority of the Spring recruiting and are proud to officially introduce the excellent student athletes that will be joining the team next season.

Tanner McCorriston – Goaltender – Whitecourt Wolverines (AJHL)
Tanner, a St.Albert native, joins the Thunder following an excellent three year career as a starting goalie in the Alberta Junior Hockey League with the Spruce Grove Saints and Whitecourt Wolverines. He brings with him plenty of winning experience including an AJHL Championship in 2014 with the Saints. In his two years with Whitecourt, he set Wolverine team records for career wins (36), career shutouts (2), wins in a season (24) and shutouts in a season (2).  McCorriston also holds the team record for most starts by a goaltender in a season and career. 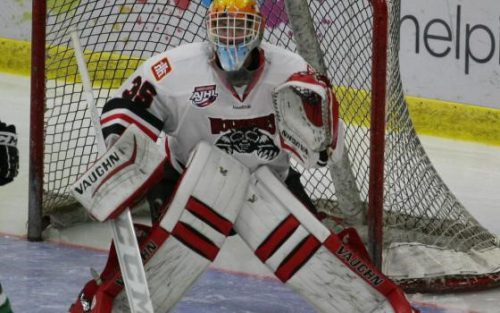 Ian McLellan – Forward – Grand Prairie Storm (AJHL)
Ian is from Red Deer and has spent the past three seasons with the Grand Prairie Storm of the AJHL. This past season Ian served as Captain of the Storm and had a career high 38 points. Ian is an excellent two-way player and will bring his leadership skills to the Thunder. Ian is also a player with Championship experience winning the Telus Cup (National Midget Championship) with the Red Deer Chiefs in 2013. Ian will be enrolled in the Bachelor of Management program at Concordia. Jakob Lavoie – Defenseman – Canmore Eagles (AJHL)
Jakob is from St.Albert and has spent his last 3 seasons playing with the Canmore Eagles. Jakob was the Captain of the Eagles last season and is a physical defenseman that takes pride on his work in his own end. Jakob will bring a strong work ethic and leadership to the Thunder and will be a huge help to the Thunder PK. Jakob will be enrolled in the Bachelor of Science Faculty at Concordia. Rory Davidson – Forward – Battlefords North Stars (SJHL)
Rory is from Delburne, Alberta and spent last season with Battlefords of the SJHL. Previously Rory played 2 seasons with the Drumheller Dragons of the AJHL. Rory is an excellent skater and his speed will be an excellent asset for the Thunder, especially at home where they play on an Olympic-sized rink. Rory has been part of many successful teams and won 2 Telus Cups (National Midget Championship) with the Red Deer Chiefs in 2012 and 2013. Rory will be taking Science at Concordia next year. Chance Thomas – Forward – Dauphin Kings (MJHL)
Chance is from Edmonton and has spent the last 2 years with Dauphin in the Manitoba Junior Hockey League. Previous to his time in Manitoba, Chance spent a year playing for the North Bay Trappers of the NOJHL. Chance is an offensive forward that was able to put up 107 points in his 166 game Junior A career. Chance will be enrolled in the Faculty of Management at Concordia. Romano Morrison – Forward – Dauphin Kings (MJHL)
Romano is from Edmonton and spent last season with the Dauphin Kings in the Manitoba Junior Hockey League. Romano previously played 2 season in the AJHL with the Calgary Mustangs and Whitecourt Wolverines. Romano is a big and fast power forward that will contribute at both ends of the ice for the Thunder. Jordan Busch – Defenseman – Kimberley Dynamiters – KIJHL
Jordan is from Edmonton and played the last three seasons with Kimberly of the KIJHL. Jordan is a strong skating, puck moving defenseman who put up excellent number in his three years in Kimberley. Last season Jordan was named Best Defenseman in his division and scored 66 points in only 52 games.  Jordan will be enrolled in the Bachelor of Arts program next year and eventually plans on pursuing a career in Education.