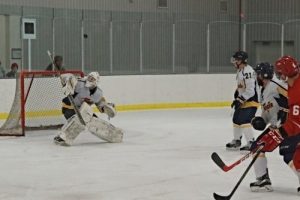 This weekend the Thunder returned from their bye week to take on the Briercrest Clippers. On Friday the Thunder struck early with Chance Thomas scoring his first ACAC goal. However a strong second period by the Clippers put them ahead heading into the third period. Despite a goal by Rory Davidson and multiple scoring opportunities for the Thunder, the Briercrest goalie stood tall and the Thunder fell 4-2 after a Clippers empty net goal.

Saturday afternoon the Clippers took the early lead only to see the Thunder storm back to take the lead on goals by Romano Morrison, Colin Minardi and Phil Dillon. A late point shot tied the game for the Clippers with just 9 seconds left in regulation and the Thunder men were off to overtime for the first time this season. The Thunder struck quickly in OT on a goal by David Randall and the final was 4 to 3 for Concordia. Tanner McCorriston got the victory in goal and played an outstanding game, making 29 saves.

Next up for the Thunder is a home and home against the NAIT Ooks. The puck drops Friday at 7 PM at NAIT and Saturday at 8:15 at Clareview.