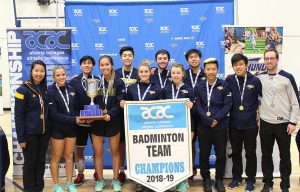 It was an action packed weekend at Concordia University of Edmonton as the institution hosted the 2018-19 ACAC Badminton Championships. Some space will need to be made in the Ralph King Athletic Centre as the Thunder will have to raise eight new banners including a two gold, one silver and five bronze.

The Thunder were off to a great start on the opening day of the championships as they were able to take the throne of the ACAC Team competition from the NAIT Ooks who held the title for the past eight seasons.  The last time the Thunder won gold in this event was during the 2007-2008 season.

Following the first day of competition was the ACAC Badminton Championships Awards banquet hosted at Highlands Golf Club where the Thunder stole the show once again. Head Coach Kevin MacAlpine was named the 2018-19 ACAC Badminton Coach of the Year. “I was honoured to be named the ACAC Badminton Coach of the Year. The dedication and enthusiasm of the athletes makes it a pleasure to coach here at Concordia. Without the determination of the athletes, we wouldn’t be where we are as a team. A big thank you goes out to Sam Wong as well, for her support as Assistant Coach, she is a true asset to the team as well!” Kevin is in his 10th year of coaching the Thunder and this will be the third time he has walked away with this award.

To top the night off, Takeisha and Desmond Wang were named ACAC Badminton Players of the Year after going undefeated throughout the regular season. This is the second consecutive year that Takeisha has been given this award and she is more excited than ever before, “I am very proud of my team’s accomplishments this season and I feel that we have all grown so much together this year. We had a strong team and was able to win this year’s ACAC Championship, which was definitely one of the biggest highlights of my collegiate badminton career. It’s a surreal feeling to finally be able to beat our rival team (NAIT) for this title. I also feel honoured to be named this year’s ACAC female badminton player of the year. It feels amazing to be able to represent Concordia athletics at this level of badminton. I am so grateful for my teammates and coaches who have gotten me here!”

As for Desmond, this was the first time receiving the award in his young badminton career as the former CCAA men’s singles champion, “This season, our team came out to perform, and that was shown when we won the ACAC Team Championship banner! I’m so honoured to be named ACAC male player of the year, it’s my first year receiving this award, and I couldn’t be any happier. Without my coaches and teammate’s support thought, I definitely would not have done this well this season”.

Day two of the competition featured the individual competitions to determine who would be representing the ACAC at the upcoming CCAA National Badminton Championships in Truro, NS (March 6-9, 2019).

In the women’s singles event, the bronze medal match was an all Concordia battle of the Turcotte sisters where Kassidy defeated Kennedy 21-10, 21-14. Eyota Kwan of NAIT would claim the gold medal and Samantha Hsu of NAIT the silver.

In the men’s singles event, Thunders Nicolas Pittman lost a heartbreaking gold medal match to King’s Narayan Ramdhani 16-21, 21-17, 21-17. After winning this event throughout the season, Pittman was disappointed with the result however finishing in second place would secure his ticket to the CCAA National Championships.

Thunder pairing of Braxton Wong and Raphael Wong were able to find the podium in the men’s doubles competition by defeating Alex Boulier and Colton Grier of Olds College (21-8, 21-12) for the bronze medal. The NAIT duo of Jeffery Ko and Ronuelle Mendina were able to defeat teammates John Li and Tyler Walsh for the gold medal.

Kassidy Turcotte was able to pick up her second medal of the day by teaming up with Kaylee Morris in the women’s doubles event where they would defeat Angelica Alberto and Chanel Simrose of Kings in the bronze medal match. The Ooks pairing of Bea Bernardo and Ryo Kuramochi were able to defeat teammates Samantha Hsu and Connie Juang 22-20, 21-19 for the gold medal. Thunders Turcotte and Morris will be representing the ACAC as the second women’s doubles team at CCAA National Badminton Championships.

Instead of entering the men’s and women’s singles events, reigning CCAA National Champions and ACAC Players of the Year, Desmond Wang and Takeisha Wang wanted to team up and compete in the mixed doubles event. The sibling duo cruised through the competition and defeated Ooks pairing of Luc-Ly Nguyen and Connie Juang 21-10, 21-9 to capture the gold medal and a ticket to the CCAA National Badminton Championships. Thunder pairing of Braxton Wong and Kaylee Morris were able to win the bronze medal by defeating teammates Raphael Wong and Kennedy Turcotte.

Congratulations to the Thunder badminton team on an amazing season and best of luck to our athletes who will be representing Concordia University of Edmonton and the Alberta Colleges Athletic Association (ACAC) at the CCAA National Badminton Championships on March 6-9, 2019.