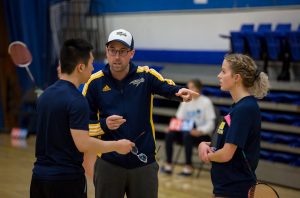 As alumni of the Thunder badminton, golf, and curling programs as a student-athlete, MacAlpine joined the badminton team as an assistant coach in 2005 and would take over head coaching duties in 2009. MacAlpine was tasked with overhauling the student-athlete recruitment program to increase the competitiveness of the team, along with increasing the academic performance, retention rate and graduation rate of the program. During his eleven seasons as the head coach of the Thunder badminton program coach MacAlpine has guided Concordia to 3 CCAA Gold Medals and 17 ACAC Gold Medals including an ACAC team championship in 2018-19. Additionally, for the 5th time in his career, Kevin was named ACAC Badminton Coach of the Year this season along with being honoured as the CCAA Badminton Coach of the Year for the 3rd time in his career. MacAlpine closed out the athletics year by receiving the prestigious CCAA Coaching Excellence Award as the top collegiate coach in Canada.

Coach MacAlpine was passionate about the sport of badminton and the success of his student athletes following life after Concordia. His impact on the Thunder Badminton program has been recognized both provincially and nationally. Kevin was also heavily involved with the Alberta Winter Games as the coach of the Zone 5 badminton team since 2004 and coaches at M.E. LaZerte High School where he currently acts as the Assistant Athletics Director. Additionally, he has served as the ACAC Badminton Convenor, the Metro City of Edmonton Convenor and the ASSA Badminton Commissioner.

While it was a difficult decision to step down from a program that meant so much to MacAlpine, he stated that this decision was in the best interest for his young family and career aspirations. In reflecting on his time representing the Thunder he stated “I am so grateful for the time I got to spend at Concordia as an athlete and coach. It is a university that I will always advocate for and promote. Over the past 19 years I have so many great memories with, and have learned from, the incredible athletes that I coached. The Thunder athletics department is a top notch team that I have been proud to be a part of.”.

In praise of Coach MacAlpine CUE Director of Athletics and Recreation, Joel Mrak, had this to say: “We are very lucky to have surrounded our department with such quality coaches, and Kevin is no exception. I extend my utmost appreciation to Kevin for his nearly 20 years of being a part of Thunder athletics. He is an impressive leader and his contributions to CUE are immeasurable. He will be missed, but know that he will still be around as a fan and look forward to welcoming him back to campus. On behalf of our entire department, we wish him the best in retirement and his new found free time to spend with his family.”.

A new head coach for the Thunder Badminton program will be named in the near future.