Thunder Badminton Come Back from Honolulu with Medals

On New Year's Day, the Thunder Badminton team left for Honolulu where they competed in the Honolulu Badminton Open.  The Thunder did very well in the tournament with their fellow ACAC schools NAIT and King's also making the trip. Takeisha Wang continued her dominance in the Women's Singles division where she won the Gold Medal.  Takeisha/Cecilia Wolski won the Gold Medal in the Women's Doubles division and Takeisha/Braxton Wong won the Silver Medal in the Mixed Doubles division losing a very close match to a team from Japan.   On the consolation side, Cecilia Wolski got the consolation first place in Women's Singles.  Overall it was a great effort by the entire team.
The Thunder also enjoyed Waikiki Beach, hitting the waves at North Shore, seeing the beautiful Hanauma Bay, hiking up Diamondhead, going to a Luau, the zoo, snorkeling, great food and many other activities.  The Thunder are in action Jan 22nd in their 2nd ACAC tourney of the year at King's University. 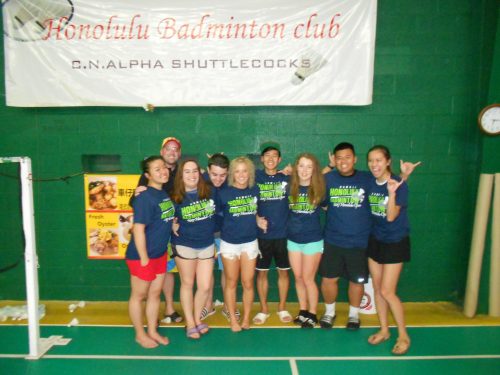