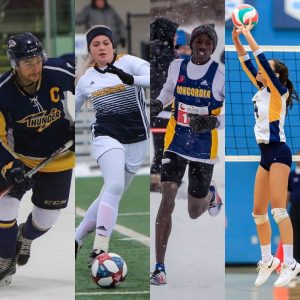 After an incredible 2018-19 season that saw 4 CCAA (Canadian Collegiate Athletic Association) medals and 6 CCAA appearances, the bar was set high to surpass the previous season’s accomplishments in 2019-20. Although we are only at the halfway point of the season, Concordia is off to a great start with 1 CCAA gold medal and 3 CCAA appearances to show for in the fall semester. Now that students have some time to relax for the holidays, lets take a look of what has happened in the first half of the season in Thunder Athletics: Before the season began there were high expectations for the Thunder women’s golf team as they were ranked 1st nationally! The team performed well under the new leadership of head coach Larry Petryk. At ACAC (Alberta Colleges Athletic Conference) Championships in Camrose, AB the women’s golf team finished 1st overall wining the ACAC Gold medal qualifying for CCAA Championships and the mixed team finished 2nd overall to earn the ACAC silver medal. On the men’s side, Nicolas Pittman led the way for the Thunder finishing 8th overall in the individual standings.

Kassidy and Kennedy Turcotte lived up to their expectations and delivered an amazing season as they finished 1st and 2nd at conference championships, both being named CCAA All-Canadians. Kassidy was recognized as the ACAC Golf Payer of the Year and Coach Larry Petryk was named ACAC Golf Coach of the Year!

At CCAA National Championships hosted by Cégep André-Laurendeau in Sorel-Tracy, QC, the All-Canadian duo of Kassidy and Kennedy would finish 5th overall in the team competition. There was a lot hype heading into the 2019-20 Cross Country Season as everyone was excited to see 2nd year phenom runner Leonard Chesoo chase the CCAA title after winning the silver medal one year ago. Additionally, the women’s team drew a lot of attention after being ranked 5th nationally.

As projected, Chesoo finished in 1st place at 4 of the 4 ACAC Running Room Grand Prix’s he participated in and cruised his way to a gold medal at ACAC Conference Championships running a time of 25:27 and was named ACAC All-Conference and Cross Country Runner of the Year. On the women’s side, it was Ana Zulic who had a terrific season for the Thunder finding the podium at 3 of the 4 Grand Prix’s she participated in followed by a 7th place finish (25:23) at ACAC Conference Championships earning a ticket to the CCAA Cross Country Championships in Grand Prairie. Zulic was also named to the ACAC All-Conference team.

The CCAA Cross Country Championships saw some harsh weather conditions in Grand Prairie that added a whole new element to an already difficult course, however, Chesoo was determined to be the first across the finish line as he did so in a time of 27:12:27 earning his first CCAA Gold Medal. On the women’s side, Zulic finished in the top 12 running a time of 26:51:23.

There was a lot of pressure on the Thunder Women’s soccer team this season since Concordia was hosting CCAA Women’s Soccer Championships in November. They did not want to be the team that was handed a free ticket to nationals, but wanted to prove themselves, and that they did! The Thunder went from being unranked to 6th nationally and finished the regular season 10-1-1 (2nd overall). At ACAC Conference Championships the Thunder would fall short to the NAIT Ooks 3-2 in a hard fought gold medal match. The Thunder had 4 players named to the ACAC All-Conference team at the conference championship awards banquet:

Unfortunately, the Thunder lost the opening two matches of the tournament to Champlain Saint-Lambert Cavaliers (4-2) and the Seneca Sting (3-1) to be eliminated from medal contention. Due to poor weather conditions the ranking matches were cancelled on the final day of the tournament. After a successful 2018-19 campaign winning the ACAC silver medal, the men’s soccer program saw some changes in the offseason that raised some question marks heading into the season. Hussein Shabdi took over the program as the new head coach where he was able to manage and recruit 7 new players to the roster in a short amount of time. Throughout the season, the Thunder earned the reputation as a threat in the ACAC north finishing the regular season with a 8-3-1 record having and impressive 43 goals for and only 7 against.

At ACAC Conference Championships hosted by NAIT, the Thunder would lose a heartbreaking opening match to Red Deer College 2-1 removing them from medal contention. At the conference championship banquet Concordia had 4 players named to the ACAC All-Conference team: The Thunder Men’s Hockey program has taken some big steps forward over the past 3 years having made the playoffs in each of those years however failing to advance past the first round. Under new leadership from head coach Joey Bouchard along with the addition of 6 first year players, the Thunder are hopeful they can make the jump from competitor to contender status.

After 14 games played the Thunder have a 5-7-1-1 record sitting in a playoff spot with 12 points. Only 6 points separate the 6th place team from the 3rd place team so it should be an exciting battle for the bottom four playoff spots heading down the stretch.

The regular season will resume on January 10th, 2020 when the Thunder travel to Lac La Biche to take on the Portage Voyageurs. This offseason there were some changes in the women’s volleyball program with the hiring of Erinn Jacula as the new head coach. Under her leadership the Thunder find themselves with a 2-10 record. Despite having a losing record, the Thunder frequently find themselves going the distance in most sets proving they can compete with some of the leagues best teams. They are only 4 points out of the last playoff spot so expect a big push from the Thunder in the second half of the season.

The regular season will resume on January 10th, 2020 when the Thunder host the Lakeland Rustlers. Head coach Lucas Jacobson and the Thunder men’s volleyball have had a slower start than anticipated during the first half of the season. After letting a few close games slip out of their hands, the Thunder have a 3-9 record with 6 points. The team is confident that they are a better team than what the standings reflect and are eager for the season to resume to gain ground on the Kings Eagles and Lakeland Rustlers who sit in the final playoff spots with 14 points each.

The Thunder will have the perfect opportunity to take some points away from the Lakeland Rustlers when the season resumes on January 10th, 2020. After losing some key veteran players in the offseason the Thunder have a much younger squad this season with the addition of 6 first year players. The Thunder have gotten off to a slower start then what head Coach Robbie Valpreda is familiar with as in previous years. They have a lot of ground to cover in the second half of the season currently sitting 10 points out of a playoff spot with a 3-9 record.

The season will resume for the Thunder on January 17, 2020 when they host the King’s Eagles. The Thunder men’s basketball team earned quite the reputation following the 2018-19 season after finishing first in their division and picking up the ACAC silver medal. This year the team had to do some adjusting to the roster after losing some veteran players and adding 6 first year players. Currently the ACAC north division is very tight as the Thunder find themselves in the 4th spot. It should be a very interesting second half of the season to watch as only 10 points separate the 5th place Lakeland Rustlers from the 1st place Keyano Huskies.

The season will resume for the Thunder on January 17, 2020 when they host the King’s Eagles. Although the CCAA national rankings have not yet been released, expectations are high for the Thunder men’s curling team since 4 of 5 curlers are returning from the 2018-19 CCAA Men’s Championship team. The Thunder women’s team is looking to bounce back this season after failing to qualify for playoffs in 2018-19.

Both the men’s and women’s teams had very strong starts at ACAC Bonspiel #1 hosted by Lakeland College where the men would finish tied for 1st place with a 4-2 record while the women’s team finished in 2nd place with a record of 4-2.

The second half of the season will kick off right here in Edmonton as the NAIT Ooks will host ACAC Bonspiel #2 on January 24-26, 2020 at the Avonair Curling Club. Despite losing former CCAA men’s singles champion Desmond Wong from the roster, the Thunder were fortunate to add 5 solid first year players to once again be ranked 1st nationally to start the season!

The Thunder badminton team hope to continue to roll into the second half of the year as they begin to gear up for ACAC Tournament #2 hosted by The King’s University on January 19th, 2020.

The Concordia University of Edmonton Thunder Athletics program has a proud history of excellence at the highest levels both provincially and nationally. The Thunder have been a part of the Alberta Colleges Athletics Conference (ACAC) since 1992 and have more than 200 student-athletes representing the school in the sports of badminton, basketball, cross country running, curling, golf, hockey, indoor track, soccer and volleyball. To learn more about Thunder Athletics, please visit http://www.gothunder.ca/.